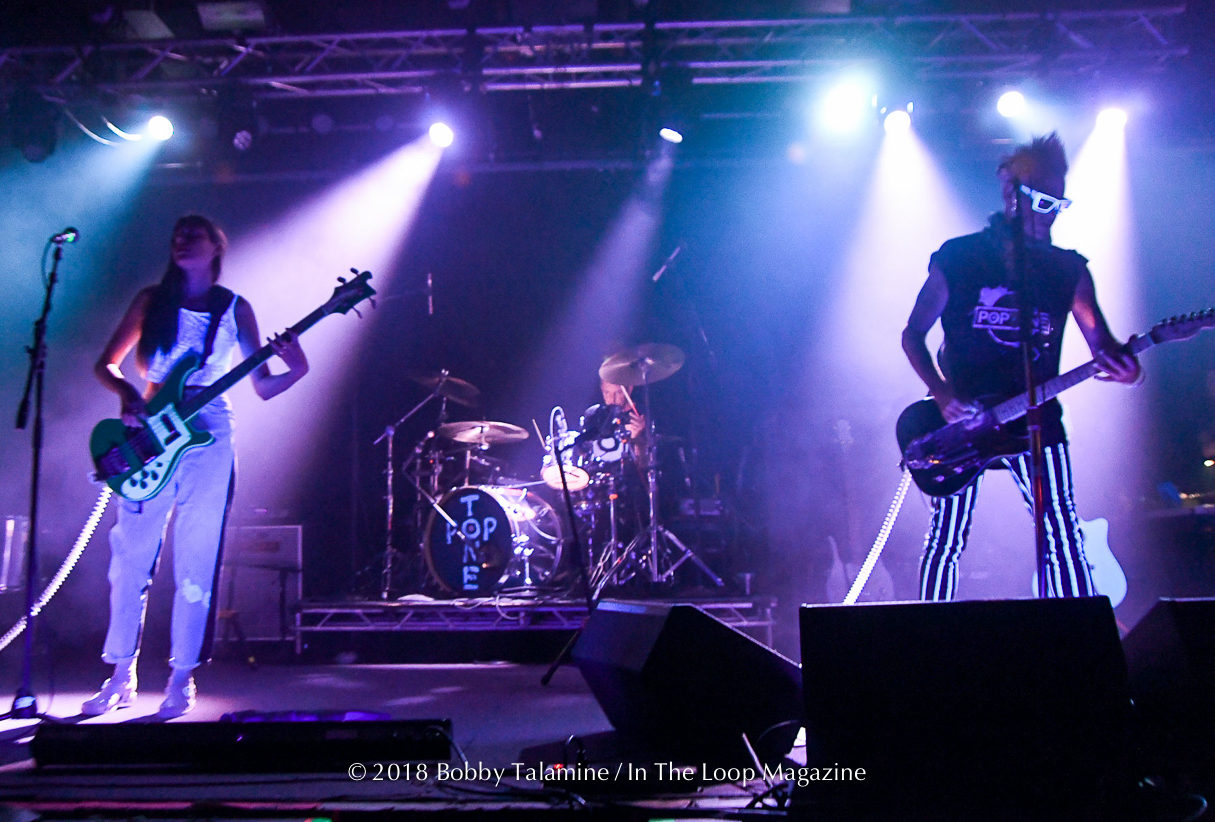 You know things are cool and different with the band Poptone prior to hitting the stage: their neon lights are on, and everything within contact of these strobes illuminates the whitest of the white. Then Daniel Ash hits the stage first, to the Tones on Tail instrumental “Rain”, and the first thing you notice are Daniel’s wickedly illuminated shades, let alone the black and white vertical striped pants. This dude is the definition of all things Rock n’ Roll and Post-Punk cool, even over the age of 60.

Daniel and Kevin Haskins the Drummer of Poptone, have a back catalog of coolness to cherry pick from, and to make the songs of Tones on Tail and Love & Rockets come alive. Diva Dompe, Kevin’s daughter on Rickenbacker Bass, along with some sexy Floor Tom Percussion and also background samples to fill in when necessary, is no slouch either to fill out the band.

Doesn’t matter if it’s a Thursday night in Chicago, with misty drizzle going on outside the venue. Their fans came to dance, at least in the area I was standing in. Partly because their setlist was timeless. Partly because this band is so sexy / cool performing live.

Yes- Daniel Ash is the forefront of this band, providing all varieties of musical accompaniment, and fortitude. But make no mistake- this band thrives on the unending backbeat provided by Kevin Haskins. Again and again, his sense of swing and heavy bass drum attack punches these iconic songs to another level- endlessly fascinating – endlessly riveting.

The setlist had standout gems from beginning to end, all the way through the encore and the ever so raucous and so damn fun to let loose to in “GO”. Can’t get enough of this song, constantly reminded of the days back at Exit on Wells, Club 950, Neo, Smart bar, wherever in town this was played  in the eighties, and the crowd always – I mean always going apeshit to this song.

When Poptone plays live, with this kind of sophistication and panache, no matter the size of the venue, you can’t help but reminisce of the good times, and how great it is to be alive, and survive. Poptone means business, and we’re all so lucky to witness it live and in person.

Openers Automatic, with Lola Dompe on Percussion, Izzy Glaudini on Synths and Vocals, and Halle Saxon on Bass and Vocals, have a cool low key seductive vibe and sound about them, with a nod towards the band Warpaint, and an innocence about them that provokes further listening.

As for Replicant- the openers for tonight’s show: Garret Vernon Justin DeLay and Jordan DeLay have a sound that’s also undeniable and developing with a wicked vibe of lust and anger- a melting pot of Darkwave and synths with oh so cool vocals from Garret, and heavy duty Bass lines from Jordan that undeniably pulls you in, even with a short set. Love these guys.

For photos from the Poptone show at Concord Music Hall, click here

Concert Review: The UK's, The Horrors, Bring Their Dark Danceable Show To The US With Massive Showing At Bottom Lounge Poptone @ Concord Music Hall