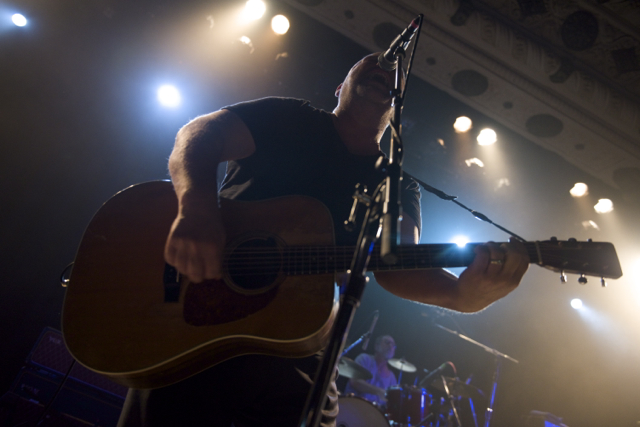 Wednesday, June 10th 2015, The Pixies filled the house (and then some) at the historic Metro. This was the first time the Pixies had played here in over 25 years. The late night, last minute solo show was set for 10PM but the line around the building was still trying to get in when they were supposed to take the stage. Pretty impressive for a last minute deal. Luckily for those last in line fans, the band took the stage at around 10:15 and didn’t stop for over an hour playing everything we’ve come to love including new classics from the latest release, Indie Cindy.

It was a surprise show put on by the band whose career spans nearly 30 years. Led by Black Francis, the acoustic guitar wielding front man and the band owned the stage. This came about due to a sudden cancellation by their co-touring band headliner, Robert Plant and the Sensational Space Shifters. Lead singer, Robert Plant, came down with laryngitis and had to postpone several shows, including the Chicago stop, to September 23, 2015. The Pixies, never one to shy away from a live performance, stepped up and announced the last minute gig via social media alerts an radio and television spots enough that no true Pixies fans would miss. It was a rare, intimate performance that fans will be talking about for years to come.

Pixies tore through almost 30 songs tonight with deep classics, a Jesus and Mary Chain cover, a crowd rousing birthday shout out to guitarist Joey Santiago and new tracks fast becoming classics in their own right.

You could tell this was a last minute gig. No special lighting, no backdrops, no special merch for sale to commemorate the gig. Just a band, their instruments and a catalog of tunes.

The band was on it. They were tight. They were having fun and you could feel the love they were getting from the audience made them come alive. Typical little interactions with the audience didn’t bother anyone as you could notice friendly banter between drummer, David Lovering and now regularly touring bassist Paz Lenchantin proving the normally shy guys and gal were glad to be there.

Photo Gallery of this show here.

For more info on the tour,

For more info on Robert Plant and the Sensational Space Shifters,