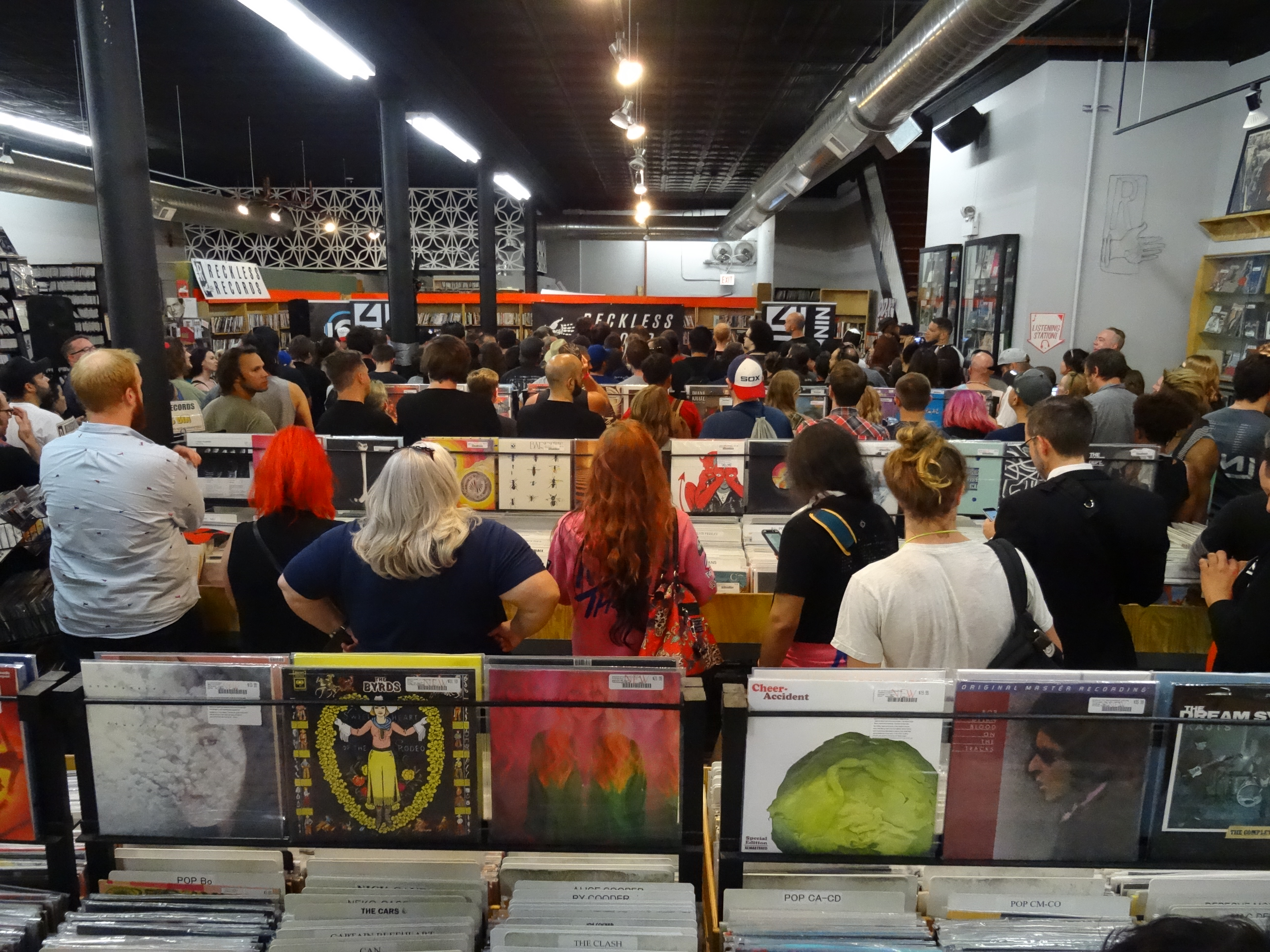 Tonight, Trent Reznor and company made a surprise appearance at Reckless Records in Wicker Park. They made a hint of things to come the day before with a Tweet showed the band walking in Chicago next to the Pritzker Pavilion in Millennium Park and stating, “Chicago – We have arrived. Does anyone know a good record stores we should check out tomorrow?”

This got the speculations running wild. Those theories were soon made reality when 101 WKQX radio station made the announcement that the band would be making an in store appearance. Fans lined up early to get a wristband for admittance to the limited gathering on Milwaukee Ave. Those lucky few not only got in, but a special edition NIN slip mat for their record players and a new box set record (signed and not available to the general public) from Trent and Atticus, ‘The Vietnam War’ Original Score Soundtrack, a film by the amazing documentarian, Ken Burns. This is an album 4 years in the making according to Reznor and marks the 6th time, the Oscar winning duo worked together on music, outside of Nine Inch Nails.

Fans entered around 6PM at Reckless. They gathered at the makeshift stage set up in the back to the store. Someone made an announcement about 15 minutes later and the band walked out to deafening cheers. They sat down at the table and the Emcee’s walked about giving the mic to would-be interviewers who asked questions to Reznor and his band.

Some of the fielded questions included, “How is this current tour going to look and feel?” To which Reznor replied, “We had to step back and take a look at what’s been done. Because it’s all been done before. How can we make this different. So we hope we did that.”

Another asked, “Will you be joined by any special guests on stage tomorrow (Riot Fest) and any chance you’ll be joined by Al Jourgensen of Ministry for ‘Supernaut’?” The crowd goes wild for this one. Reznor said, “I say, there is no special guests with us tomorrow at Riot Fest. Just us. In general, we’ve already worked with everybody that’s good.” (laughter erupts) Reznor continues, “There’s a couple left. We’re all big fans of Tobacco, actually, the artist, not the drug.” As for Al, “We haven’t discussed it. I do wanna say how important Chicago was to me in the early days. Al was right there in it. The most inspiring place for me was Chicago, when Wax Trax was doing Al and all his many side projects, it just felt like another planet. We were just talking about how I drove here to see ministry in the late 80’s at a New Year’s Eve show and it was one of the best shows I’ve ever seen. I’m very grateful for the inspiration from Al and all the things Wax Trax was doing. What Wax Trax did was super fucking important.”

Other questions were about making music video and doing movie appearances, what does he think of current politics and the world situation and then some asked questions to his band like how their side projects are going, what’s family life like and who do they like listening to these days. All of which were answered within the almost hour of Q&A.

A question was about what he thought of the current market for physical and digital media. Reznor replied, “Me personally, I could ramble on about this for a long time, but I’m not fighting technology anymore. I embrace the distribution that it is. When I was growing up. I had limited access to stuff. When I bought a record, I listened to the whole record… If I hadn’t been introduced to music that way and just got bombarded with clips or hits everywhere, I wouldn’t have got that appreciation and understanding of what that artist was trying to get across or say. I’m not saying you shouldn’t stream music, but there’s just something about having a physical thing like vinyl in your hand that makes you want to get into it more.” He went on to say, “I like vinyl not particularly for the sound of it, but when I have it, I have to see it. I have to put it somewhere and when I walk past it and use it, I have to pick it up, I can smell it, I have to put it on, there is some work that makes me want to listen to it all. If I want to skip a song, I have to walk across the room and pick up the needle and make the change. Sometimes I don’t do that because I’m lazy and just let it play. And that act, makes me think about music differently than when it’s just something everywhere, just a file, you know. So we wanted to make everything available in that format so it can be special in that place.”

After the time was up, Reznor and company said their goodbyes and exited stage left.

The hosts announced that they had Riot Fest tickets to give away and most of the fans stuck around for those. They gave them out to fans who answered correct questions, told sad stories and showed their tattoos. After that, the room was directed to head over to the counter to receive their autographed copy of The Vietnam soundtrack and option to purchase rare items, other records and more, just like a private merch booth would be like.

For a video of the in-store appearance including all the Q&A answered right from the mouth of the men of the hour, click here