Most Anticipated Music For 2016 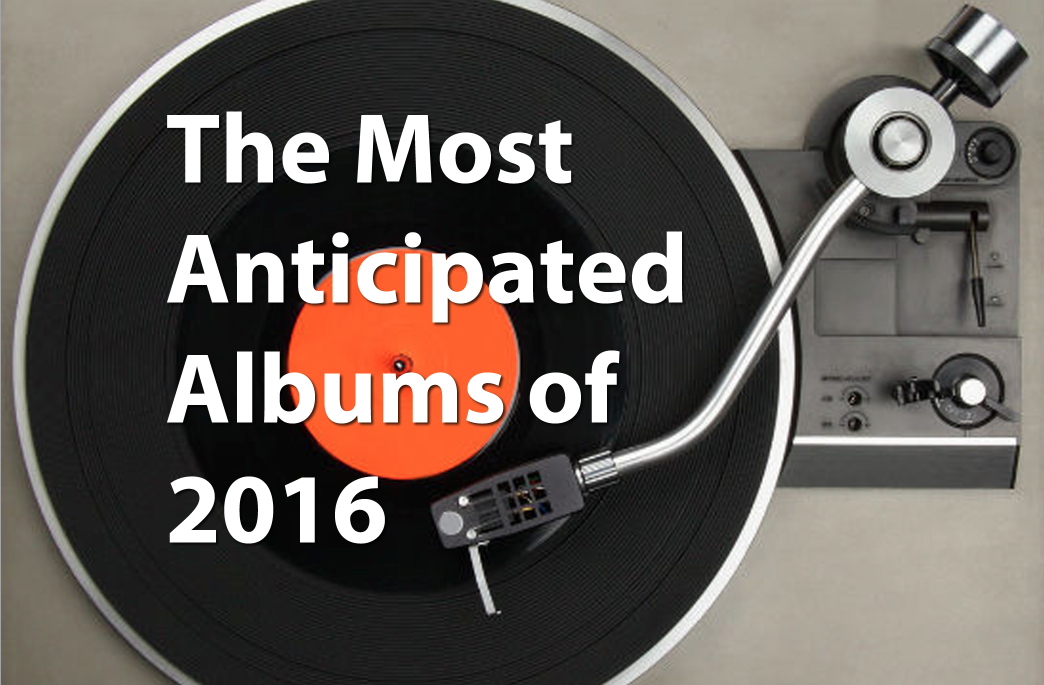 Here are some of our predictions and hopes for greatness to come from the 2016 music scene.  A few of our staff have chimed in on some high expectations for the new year.  Do you see your favorites listed here?

The most anticipated new release of 2016 should be happening as you read this: David Bowie’s “Black Star.” Produced by long-time collaborator Tony Visconti, Bowie has headed off to jazzland with the versatile talents of saxophonist Donny McCaslin and his group. The 10-minute single “Lazarus” is lush and pleading. Bowie is singing higher and breathier and the treat will be to see how the public responds to his new direction… once more.

Another veteran will have a new release in February. With “The Ghosts of Highway 20,” Lucinda Williams continues her tradition of mixing Americana folk with guttural blues. The single “Dust” is a heartbreaker and can only reveal what Williams has in store for her first release in 17 months.

I will mention right here that the END of 2016 should see new music from U2. As confirmed by Bono and The Edge, they are currently in the studio with Brian Eno. Bono has mentioned that his 2014 bicycle accident has propelled the band to get back to a more stripped down sound. Tentative album title is “Songs of Experience.”

One band that has teased out their new release with a full-length film is Suede. Titled “Night Thoughts,” (out February 22) the group has been carefully planning this album with the concept of a film that “starts with a man drowning in the waters of a deserted beach at night, as he fights for life, his mind plays out the events that lead him to be there.” Intriguing as the band has shown dedication to the material by playing it in its entirety last fall. No word on whether they will bring it to the States.

The duo of Julian Hatfield and Paul Westerberg – The I Don’t Cares – has my full attention. I included their single “1/22 P” in my 2015 Year End Review and from what I’ve read, a full out album (titled “Wild Stab”) is scheduled for release in 2016.

I am really excited for 2016.  Things are lining up to be a great year for new music.  Here are some of my favorites with pressings already in place or recording sessions in action.  Twenty artists I’m looking forward to seeing and hearing very soon (in no particular order).

Devildriver – It’s been about 3 years now since the release of their last album, Winter Kills. To be honest, I’ve fallen off the bandwagon with these guys and lately have been looking to get back on with Devildriver. This will be the first album without staple members, John Boecklin and Jeff Kendrick, so this will be an interesting album with some fresh blood. Titled, Trust No One, the album is set for release in May.

Fleshgod Apocalypse – The fourth album from the extreme symphonic metallers, titled, King, the album looks to be even more devastating than any of their releases. More classical influences will be featured and if you are not familiar with the Italian quintet, you are missing out on some powerful musicianship.

Lacuna Coil – The last I heard from the group, they lost two of their longtime members. Currently, the group is a quintet, recruiting their drum tech, Ryan Folden, as a full-time member. On a more positive note, lead singer, Cristina Scabbia promises that they will incorporate more growls. Going back to their roots seems like something that many bands do, especially now that the group has been around for nearly twenty years. This should be an interesting release.

X Japan – Their first album in nearly 20 years, the group played a reunion show in 2014. Having a well established base in their native Japan, the group also has a satisfying presence in the states. Already having released a single late last year, not much else has been mentioned in regards to the new album, which is scheduled for a March 11 release.

Babymetal – Their debut and only album currently was such a masterpiece, I am extremely eager to see if they will be able to top themselves with their next album, conveniently due April 1st. No singles, no teasers, nothing else has been released or hinted. This album might set records for the metal industry.

Rammstein – The German industrial metallers announced that they would be touring in 2016. Though that is the case, it doesn’t necessarily entail that the group would be releasing an album. But of course most bands tour on an album, but if you now Rammstein, you know that they don’t need to tour on a new album. But hey, you never know.

Dimmu Borgir – 2010 marked the last year we received an album from these Black metal greats. While certain members have been tending to side projects, the group stated that they like to take their time when writing an album that they can appreciate and stand behind. When they do release their next album, hopefully this year, it will certainly create a buzz within the metal community.

Delain – The world of Delain has been nonstop for a while now and their journey continues next month in February with the release of their their next EP titled, Lucidity. Their last album was very atmospheric and dark so I am hoping that this album follows in a similar notion with some unpredictable surprises. No singles or leaks released yet!

Aside from the aforementioned artists, there are also other artists that currently have material in production that you should look out for. While the year has just begun and only a handful of artists have announced possible albums, there is still a whole year ahead of us so who knows, maybe your favorite band might be releasing something later in the year hopefully. Here is but a small list of the artists that may or may not release an album this year:

One thought on “Most Anticipated Music For 2016”