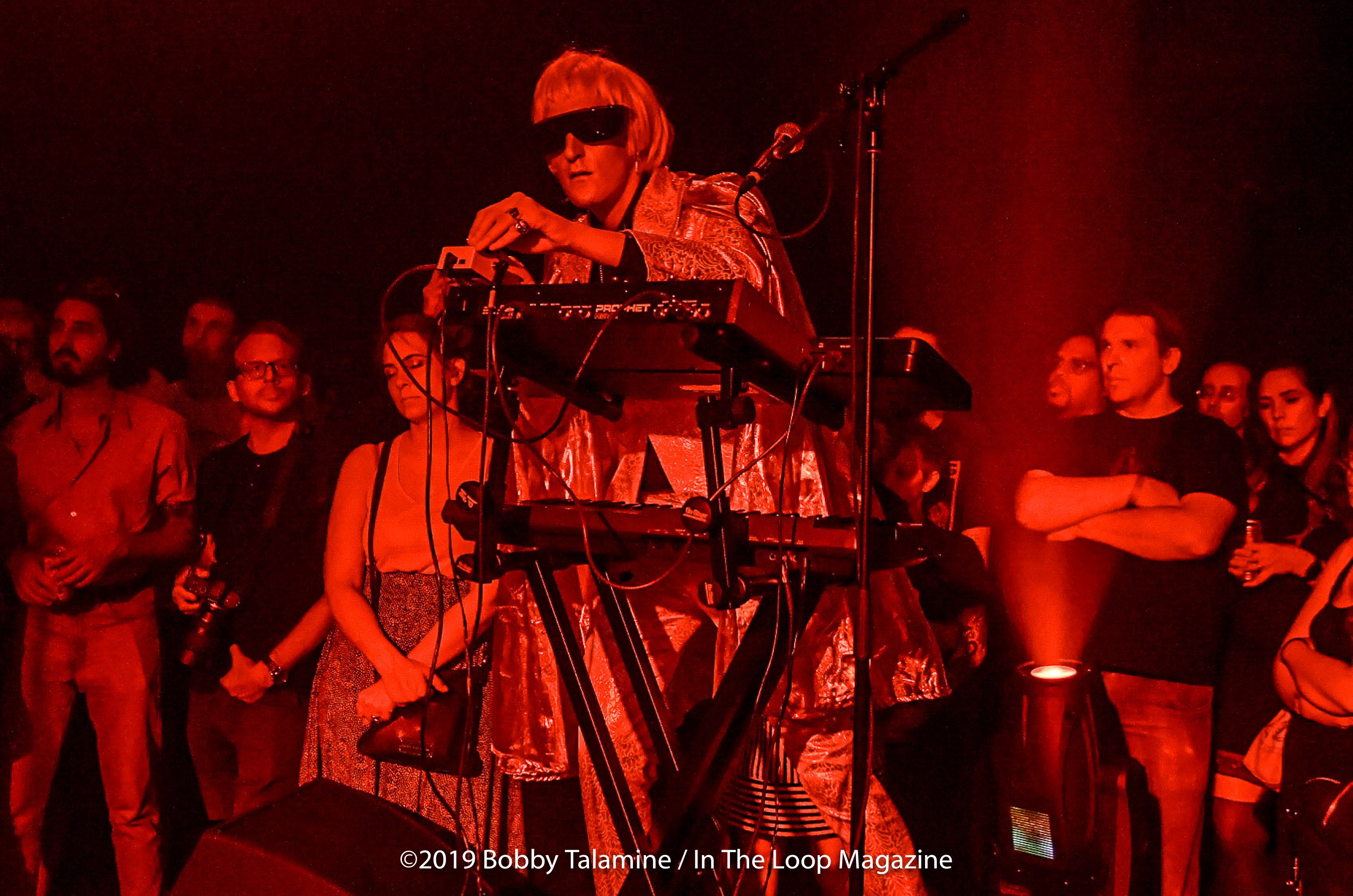 Drab Majesty headlining at Thalia Hall in Chicago on a Monday night, In the Round, (the center of the main floor- not the stage), providing an intimate setting to see the duo of Deb DeMure and Mona D do their thing, which is cultivate community with washes of dreamlike synths and keyboards, punctuated by Deb DeMure’s guitar driven darkwave sounds and accentuated vocals. Hard to get that sentence around my head to explain Drab Majesty, but where to begin?

Even they will tell you personally that their aesthetic is undefinable, from “other dimensions”, with no point of reference, which makes me cringe somewhat with the “darkwave” tag to begin this review. Having said that, their music is awash in discovery in the definable and undefinable, and my take is some early Red Lorry Yellow Lorry, a snippet of Chameleons for starters. But the added synths and backup vocal of Mona D suggest upping their game, and making it their own, which they do in spades.

The setlist at Thalia Hall? All of their recent release, “Modern Mirror”, opening with “A Dialogue” into “The Other Side”, followed by “Oxytocin”. Their third album to date, “Modern Mirror” has a lot to offer in the Drab Majesty canon, with addictive and emotional synth pop anthems one right after another, with a dreamlike haze ever evident throughout. The album gets better and better with repeated listens, I might add.

So with the entire album “Modern Mirror” front and center, there’s not much wiggle room for back catalog to make do in this set, all of which is devoted to their second release, “The Demonstration”, which also provides lots of lush and shoegazey songs throughout. In a set like this, you have to play the anthemic “Cold Souls”, which flawlessly executes the mastery of Deb DeMure’s unique arpeggiated guitar sounds and finger picking, punctuated with his above and beyond style of vocal. Songs like “Cold Souls” are classic in scope, and never get old with repeated listens, telling you that these guys are creative, mysterious, gentle, and downright embracing, each and every time they come through town.
“39 by Design”, also from their second release “The Demonstration”, also lush and beautiful, is a pleasant surprise tonight, along with their encore songs, “Kissing the Ground” and “Too Soon to Tell”.

Drab Majesty at Thalia Hall and In the Round? Irrevocably engaging and enlightening and intimate. Commanding your attention front and center, with unpredictable songs first and foremost, identities be damned.  Mysterious in a good way, with their trademark white wigs and huge dark sunglasses, and the occasional sip from a large wine bottle on top of one of Deb’s amps, which he also used as a phone prop, as if talking to some outsider from another dimension. At moments like this- campy humor and laughs, sure. But make no mistake to the beauty that is Drab Majesty. They behold and enlighten, whether witnessing live, or in your comfy home with headphones.

Openers Xeno & Oaklander, also on Drab’s Dais Record label- a minimal electronics duo based in Brooklyn New York, consisting of Liz Wendelbo on vocals and patchwork analogue synths with toggle switches, and Sean McBride, shrouded in wires coming from this and that with his multiple analogue synthesizers as well.  A captivating and French kind of sound, melding together in a brief half hour set that is captivating and sincere throughout.

Opening the show was Body of Light, also on the Dais Records label, a duo who cultivate keyboard laden songs similar in scope to early Depeche Mode as a reference, but definitely campy fun, with songs that are sharp and concise. Felt bad for these guys, since there wasn’t much room for their gear on the limits of the stage for them to do their set.

All n’ all, an exquisite show from beginning to end from Thalia Hall.