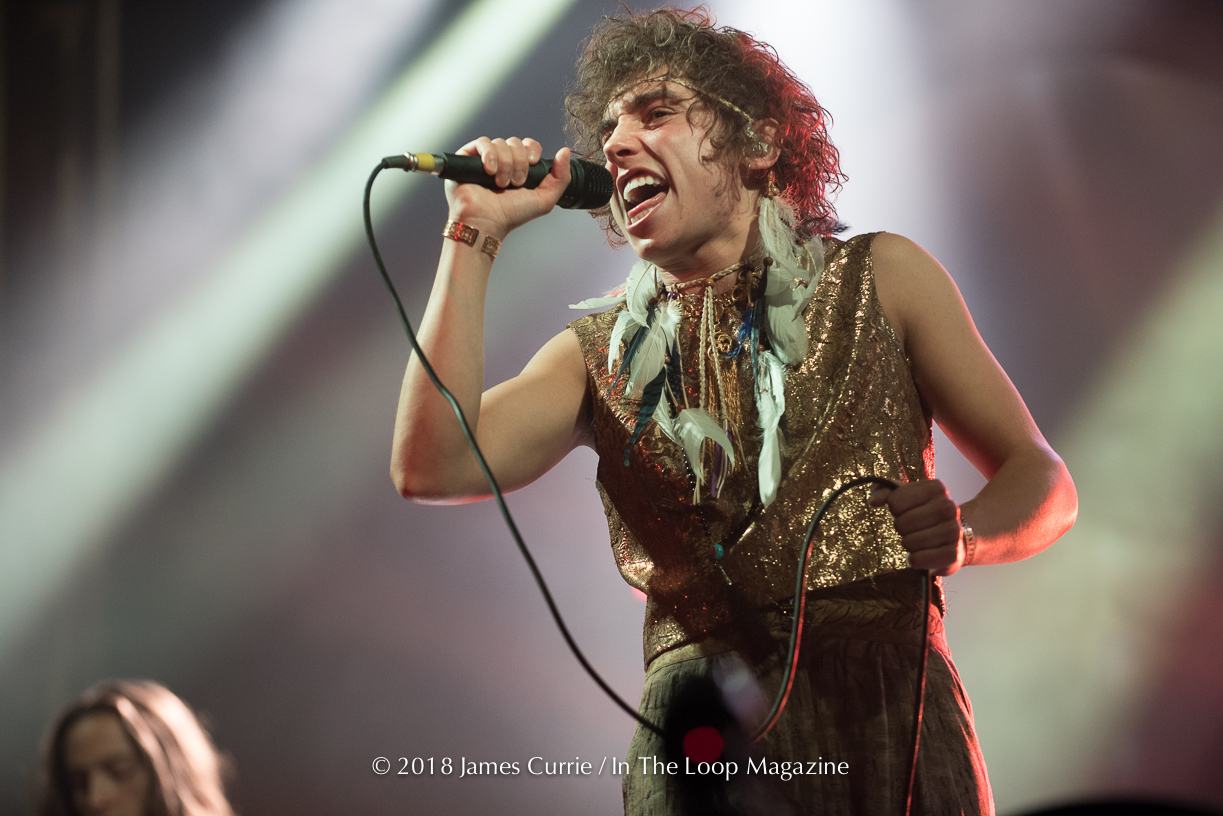 Pinballing through the sardine packed audience of this storied building, built three years before my near 90-year-old Chicago born father was spanked on the tush, there is most definitely a buzz, a static, sonic electricity that belies hype or expectation that often attaches itself to ‘the next big thing’. I’ve been in these rooms at the beginning of some mighty cataclysmic campaigns, like Guns N’ Roses at the Cathouse in Hollywood, early ’88. Slices of Aerosmith and the Stones, yes, but there was something more notorious at work, contemporary, original. The older us baby boomers get, the more our intuition and cynicism tends to sharpen when it comes to embracing new music.

We’ve become protectionists. We were there. My favorite tee is, “I May Be Old But I Got to See All the Cool Bands.” Born in the Buddy Holly ‘50’s, weaned in magical mystery ‘60’s, stoned in the Zoso ‘70’s; what do these millennials know about real rock n’ roll? Do not tread on our heroes or their untouchable musical legacies lest ye suffer the slings and arrows of outrageous judgment and social media damnation! And then, inexplicably, via a confluence of events and celestial alignment, from a Midwest blackhole known as Frankenmuth, Michigan (population 5,000), three Polish brothers with hairless cheeks, righteous riffs and reverence for the ancient ones, form a band, write some songs and message the mothership that they’ll be staying awhile. Tonight, Greta Van Fleet lands in Chi-town.

The kids in the crowd (and their parents) are alright.“I brought my mom,” boasts Chase, a 20-year-old clean cut student attending pilot school in Florida. He’s proudly clad in a Roger Waters’ “Wall” tee. “Been playing her all the Greta songs, psyched about tonight. I love ‘Edge of Darkness,’ the guitar riffs are sick. And ‘You’re the One.’ It’s beautiful.” Mama Anne chimes in, semi-wild blonde ‘80’s metal ‘do, effervescent smile. “Yeah I still got the hair!” she laughs. “I really like their ballads. Pretty mature stuff. I’ve got two other sons, my husband and I raised ‘em all on rock. Music is a family affair, right?”

Josh and Jake Kiszka, the twins born in the spring of ‘96 and Sam, who arrived three years later, would no doubt agree with that statement. The Brothers Van Fleet, along with drummer Danny Wagner – who’ll turn 20 on December 28th – are about to headline the same stage that Nirvana torched 25 years ago. Tonsilz quiver from six to sixty as the lights dim. Clock says 9 pm, Armageddon at the Aragon…and we’ll be home by 11.

“The Cold Wind” from their latest long play, Anthem of a Peaceful Army, warms the enthusiastic audience up fast. The vocal gymnastics kick in with “Safari Song” from the earlier Black Smoke Rising EP as Josh aims for the little girls with old school themes designed to lasso new school hearts and loins.

I wander about the massive enclave, from the claustrophobic floor to the balconies and back, as the set ebbs and flows through 12 songs representing their brief but productive recording career. Throwback tracks stop me in my tracks, like the hypnotizing, “Flower Power” (shut your eyes and you can almost see John Paul Jones massaging the Hammond B3), the anthemic “A Change is Gonna Come” and “When the Curtain Falls” (close ‘em again and Bonzo’s slamming the skins).

When they boys return after a furious ovation for their three encores, the locomotive, “Love, Leaver (Taker Believer) – “She’s an angel straight from Hell” – oh Sweet Connie, wait until you meet this American band; followed by, the rousing “Highway Tune,” and finale, “Rolling and Tumblin” the ebullient crowd files out into the cold southside air, warm and alive.

I walk over to the merch stand, chat a bit with Julius, a veteran of the Chicago music scene, as he vends swag to the growing Greta army. We share thoughts. He’s seen the band several times and thinks they’re ‘cool.’ This was my debut dish o’ Greta. I muster a glib remark, “Well, they’re definitely special, not quite Led Zeppelin but then again, certainly not Kingdom Come.” In all candor, having witnessed and chronicled the GN’R revolution up close and personal as executive editor of the long-gone hard rock publication, Rip Magazine – when a dozen look/sound alike acts were signed and played on MTV between ’88 and ’91 – Greta Van Fleet are not easily defined or categorized. Their music and vibe are seeded in vintage soil, often hearkening icons past. But this is new growth, fresh, even a bit dangerous. So what if the drummer isn’t quite Jack Daniels sipping age yet? When rock n’ roll stops breaking rules, then you can officially throw a blanket over it.