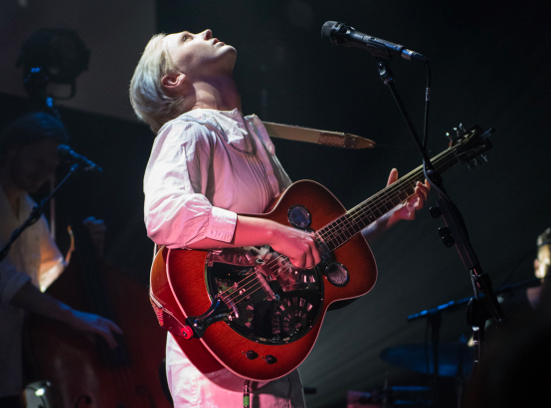 Saudade is a Portuguese word that describes a longing for someone or something that perhaps hasn’t even happened. It’s a dreaming wistfulness rather than outright sadness. It’s that calm, quiet ache for something that may never return to you.

And as I stood amidst a packed crowd at Laura Marling’s sold out Lincoln Hall show on Wednesday, July 29, 2015, I couldn’t help but think saudade. It radiated undeniably from Marling’s haunting lyrics and echoing, dusty sound. It was a stark contrast from her easy and endearing onstage demeanor, but she sashayed effortlessly between these two worlds.

Marling opened with a patient medley of songs taken from 2013 album Once I Was An Eagle, as well as a generous selection from her fifth and most recent album Short Movie.

After Marling sang “David” she paused to address the audience, recalling with a smile that she penned David in the basement of Chicago’s Athenaeum Theater back in 2013.

“Though he won’t see me anymore

I open gates that close his doors

Just to know he lives and breathes

Has to be enough for me” – David

Never one for trite love songs, Marling is known for keeping the cadence and lyrics of her music deceivingly light. But listeners fortunate enough to hear her on stage, unrushed are often hit with the heft of her words, strewn with longing and homesickness for another time and place. Most notable are the lyrics that are left unsung.

“What will I do then?

How did I sleep at night?

With you far from my side?

Hold me darling, make no sound

Silence speaks for me” – Love Be Brave

Throughout the night Marling engaged fondly with the audience, sharing her fingerpicking progress and taking requests for songs like “Failure,” which she relied on the audience to remind her of the opening verses. She packed the night with her signature earthy tones, filling her set with gems like “Master Hunter,” “Love Be Brave,” “Rambling Man” and “Sophia.”

Returning to Chicago felt like coming home, Marling remarked. Though she admitted she didn’t have plans to move, she revealing having spent her holiday in the city just a few weeks ago.

The night ended with Marling bringing back opening acts Marika Hackman and Johnny Flynn on stage for a collaborative version of Steely Dan’s “Dirty Work.”

Those who have not had the pleasure watching Marling perform live are missing out on a wonderfully immersive experience. One that is oddly uplifting despite the air of melancholy that surrounds much of her material. It’s saudade. Marling seems to know this. And she embraces it lovingly and unapologetically.