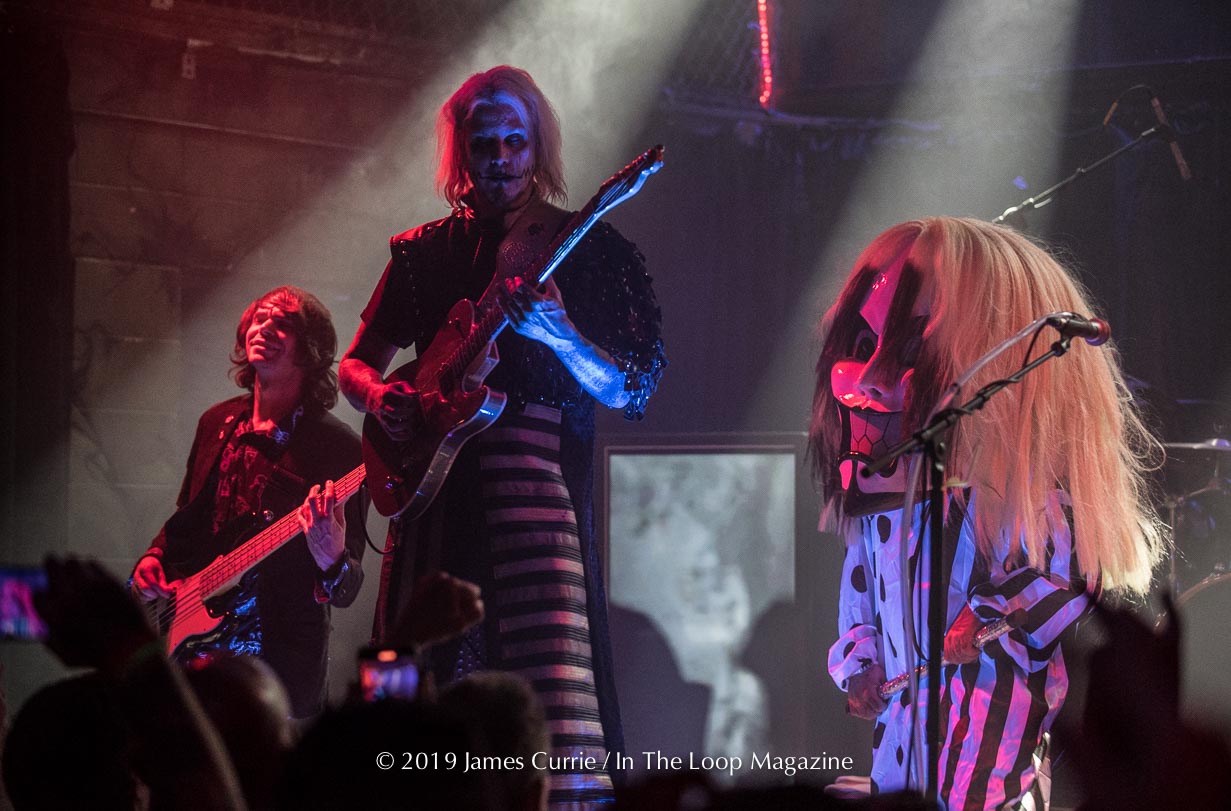 Continuing his tradition of returning to Chicago to play a solo show around Halloween, John 5 brings his spookshow back to Reggies. This time on the heals of his latest release, Invasion, which brought a few surprises that included special guests, new songs and enhanced schlocky sets. John 5 knows this audience, this venue and city. He knows what works and what fans want. Tonights show proved it. This performance even included a mini-me version of John 5 as an exaggerated character of himself makes an appearance to great fans.

We here at In The Loop Magazine have been covering John 5 doing these shows almost since the beginning. These were designed to be a spooky rock show for like minded rock fans, but in the early days, those fans just weren’t there yet. John has been a legend in the music industry for many years and has amassed a following through each of his various ventures with David Lee Roth, Marilyn Manson and of course his current mainstay with Rob Zombie, but in the early years of these solo shows there is a big difference to what it’s grown to today. I remember the first show at Reggies where literally only a few dozen people. It was nice in the fact that you could move around easy and the performance felt more personal. Compare that to today where the place is so packed you can’t even take a bathroom break without hitting a wall of bodies.

In typical fashion, J5 comes out to his classic dark stage show surrounded by campy inflatable props, vertical video monitors playing abstract loops of from horror film clips like Godzilla, Salem’s Lot and Jaws, ambient lighting and of course his band of gypsies, The Creatures, consisting of bassist (and local hero) Ian Ross and drummer extraordinaire Logan Miles Nix. They kick right into things and keep the house jumping till the end.

John dressed in a dark, custom made, long tailed, gothic suit with traces of American flag and/or Beetlejuice stripes in it, slinging his gold tone Tele. One of the things guitar fans look forward to is hearing and seeing John play various stringed instruments that range from mandolin, through banjo and a burgage of custom made lighted axes to ward off any neon demons.

Mid show, John finished a run of songs and said, “So, we usually get up on stage and do some KISS songs or whatever, but tonight I said, let’s JAM. Let’s do something totally out of the ordinary.” Continuing with, “I want you guys to give a VERY, very warm welcome to the incredible, Charlie Benante.” J5 then goes into a mid tempo rock riff and asks Ian to follow and Anthrax drummer, Charlie, to join in. They came up with a song on the fly that left jaws dropped. It was filled with solo by all and just rocked. Each with a grin from ear to ear taking in the fun.

Making a few praising remarks, John continues to appreciate his Chicago fans thanking them profusely for coming and letting them know how this crowd is just somehow better than any other stop along the tour. He said he doesn’t know if it’s the close proximity to his home in Detroit or not, but Chicago is just the best. By the end of the show, he was in tears, taking it all in with great humiliation.

Before the end of the night, John tells us a little tale on how the new record developed. He said that the record execs told him to make an album from the heart, something that literally speaks to the people telling them what he is all about. With tongue in cheek, John said,  “Ok, so, it’s a very difficult song, but if we all could sing along with it, it would make him proud. After all, we are recording this.” (nodding to the CBS crew filming in the corner). “It’s not too bad as it only has four words”. He went on to say, “Look, I only know a few things really well in life and that’s monsters, titties and guitar playing. Sorry, it’s what I know.”

John 5 is gaining more and more credibility and success with the mainstream and it’s about time, it’s only been a couple decades. Guitar fans have already placed him on a high pedestal regarding him as one of the great newer generation guitarists of our time, but the general public are slowly realizing that he’s an amazing talent, great showman and killer rock n roller too. If these shows keep up the pace of popularity they have been John 5’s gonna need a bigger boat.

Until next year, I know I’ll be looking forward to seeing and hearing more from the makeshift monster gi’tar slinger.

For more on John 5, and the Creatures, click here

Click here for video of the Jam session with Charlie Benante

Setlist: John 5 and the Creatures live in Chicago at Reggies Rock Club – November 2, 2019