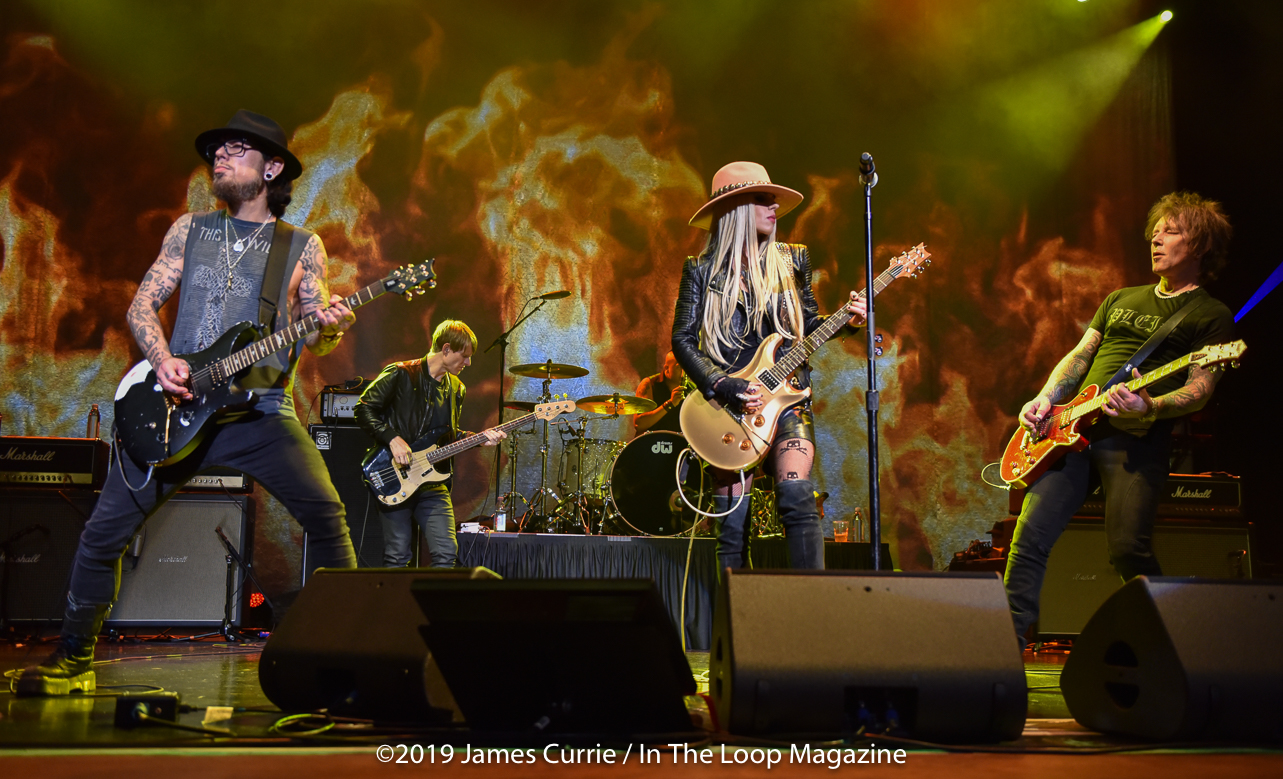 The supergroup formerly known as, Camp Freddy, still wows crowds (and themselves) as they play another live show (this time a private corporate event) bringing more fans into the fold. The Royal Machines have gained new fans along that 15 year journey including myself and have built a following that looks forward to seeing what they’ll do next. This gig proved positive as they continue to rock on.

The Royal Machines, an all-star band which started back in 2002, is a side project created by David Navarro (Jane’s Addiction), Billy Morrison (Billy Idol) and some of their rock star friends looking for a creative outlet to play songs to people who love the music as much as them. They created a band to do cover songs for fun. They would invite several of their living legend pals along to jam with them and make it a party. You could call this the ultimate side hustle for a musician.

Some of these rocker friends stuck around and have become part of the core of the group like Mark McGrath (Sugar Ray), Chris Chaney (Jane’s Addiction), Donovan Leitch Jr (Nancy Boy) and normally Josh Freese (The Vandals) but tonight Erik Eldenius (Billy Idol). Others have made one off appearances that’s become the excitement of seeing a Royal Machines show. Even the band loves seeing who will join them on stage. You just never know who will be at a Royal Machines show. In the past, they’ve had such amazing talent join them as Ozzy Osbourne, Courtney Love, Macy Grey, Billy Gibbons, Billy Duffy, Ludacris, Billy Idol and the list goes on and grows each day. Like this show in Orlando where new artists join the rock n roll roster.

Another thing that makes this band so great to see live is the variety of music they will perform. Seriously, where else would you see Dave Navarro playing a Cypress Hill song? Or Mark McGrath rapping with Darryl “D.M.C.” McDaniels from Run-DMC? This is the ultimate party band. And they found a way to capitalize on it (hence the side hustle) making them the ultimate part band for hire. They do corporate events just like this for fun. Tonight was a private party for Crestron at their annual event, Swirl. This year marks the bands 3rd time playing for Crestron and the people who attend this have grown to love it. Even the President and CEO of Crestron, Randy Klein (came out with a guitar around his neck wailing a mimicked solo), said, “These guys feel like family”, as he introduced the band and thanked the audience for being a part of it all. He went on to say, “This is all for you. Enjoy your night.”

So the show itself. It started with the core group members and the song, Jump, by Van Halen. This one always gets the crowd well, jumping. McGrath takes the lead followed by Donovan. This ends and they go right into The Car’s song, Just What I Needed which is taken over by Donovan. From there they play through more classic hits until the first of the nights guest stars makes an appearance. It’s Brett Scallions from the band, Fuel. He belts out his bands hit, Shimmer before covering The Ramones and The Doors.

Next we get a guest guitarist visit from Orianthi. The mighty female guitarist whose backed Alice Cooper, Richie Sambora and the final guitarist for Micheal Jackson. She help out with Billy Idol’s, Rebel Yell, Sabbaths, War Pigs and Jimi Hendrix’s, Purple Haze.

But that wasn’t it. We got one more surprise guest artists. It’s DMC from Run-DMC. He invites McGrath to help out with some classic 80’s rap songs like, It’s Tricky, by his old band, Run DMC and a cover of the Beastie Boys anthem, Fight For Your Right before ending with what everyone agrees started the Rap/Rock collaborations, Aerosmith’s Walk This Way.

I’ve seen this band more than a few times throughout the years. I’ve even attended one of their annual Holiday bashes in LA at The Roxy. They never disappoint. The band is always tight. Navarro is notoriously finical about getting even the solos of a song down to the note. They have fun with it as you can see from this and every performance. The fans love it. I mean, in situations like this, how many times can you say you went to your works party and saw a supergroup of musicians playing classic hits live.

The band knows this is for fun. They know this shouldn’t be taken to serious. They are gracious to all parties involved and even thanked Crestron for having them and making them feel like family. That’s what this is all about. Letting loose and having fun. A Royal Machines show is just that.

For photos from the show at Hard Rock Orlando, click here

For a video sample of the Royal Machines live at the Hard Rock in Orlando, click here