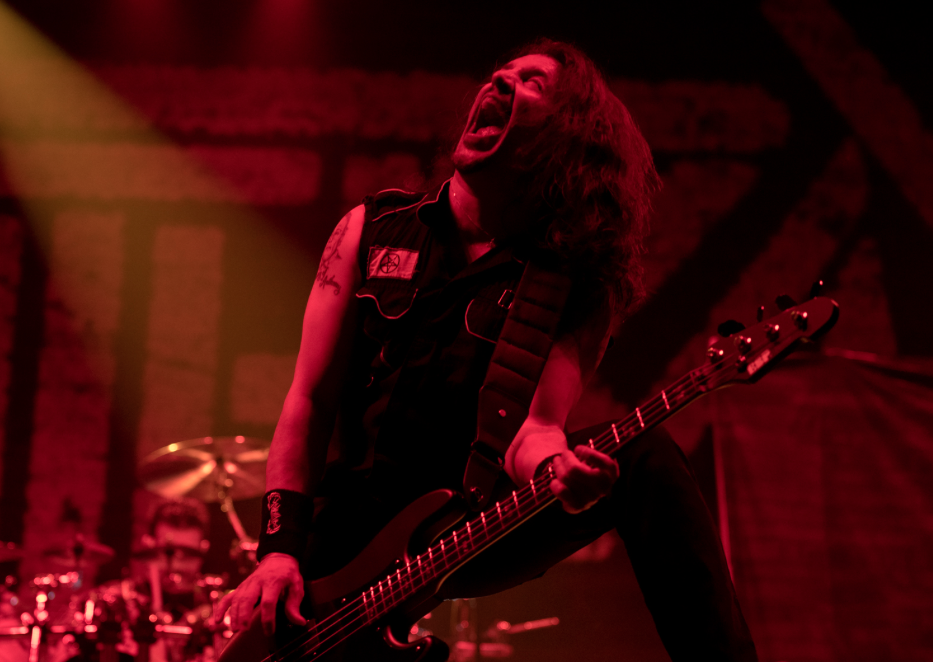 Chris (ITL): So are you ready to talk about this phenomenal record you guys have made? (For All Kings, coming February 26th).

Frank: *laughs* Thank you so much, dude. We’ve been talking about the tour and the snowstorm for the last couple of days, so it’s great to talk about the record again!

Chris (ITL): Definitely! I’ve had a chance to listen to it a few times over the last couple of days, and let me tell you, man – as a long-time fan, I expected it to be good, but you really left it all on the table with this one – It’s amazing!

Frank: Spread the word! You know, what’s great about this point where we are, we’re letting it out now, and only certain people have heard it, and so it’s really nice to hear all the positive feedback, after taking so long with it and making sure t’s the right record. It’s been all great stuff.

Chris (ITL): I know that over the years, you and Scottie and Charlie have changed up your instruments periodically – Charlie writing on guitar, for example, that kind of thing – and in that vein, you write a lot of the melodies for the songs. On For All Kings, I understand that this was the first time you actually wrote melodies with Joey in mind since Persistence of Time (1990). What was interesting to me, with that in mind, was how much of a natural progression this record seems to be from that one, even from first listen.

Frank: I appreciate that. It’s always just been a fun thing for me to write the melodies – if you’re going to have a great riff, there should be a great melody on top of it. I call it ‘making the cake’ of the song. The three of us – Charlie, Scott, and I – get together and do the music, then the melodies, and the lyrics go on top. It’s always been like that for us.

Chris (ITL): Having been a longtime fan, I think it’s great to see how the core members have remained so tight over the years with such a focused process.

Frank: You can’t just write songs in two weeks and then let the record out. You have to live with the songs, and you have to realize, we’re fans of the music, too. We have to make sure it’s the right record, and after making sure all the parts are the right parts, you just get that feeling in your gut.

Chris (ITL): And how better to celebrate Anthrax’s 35th anniversary?

Frank: Dude, it’s insane that it’s been that long, because this is a very hungry Anthrax, and it doesn’t feel like anywhere near that long. We’re still a hungry band, and whatever that next level is, that’s what we want to do.

Chris (ITL): How has having Jonathan (Donais, formerly of Shadows Fall) in the band now on lead guitar changed things or altered the dynamics?

Frank: It’s incredible. Jon has always been an incredible player, and I can’t wait for people to hear what he’s done with us. He’s done some amazing leads – you’ve heard the record—

Chris (ITL): —yeah, the leads on this record are unbelievable.

Frank: I agree, and as a fan, to hear how he’s raised the bar – I’m not even a lead player, and I’m so impressed, I just had to go back after I heard some of them like, ‘wait, what was that??” I think for the whole band, this record is our best playing. I’m very proud of that, because we really care. And I feel really good about leaving it all on the table like that.

Chris (ITL): To talk about a few of the new songs – I don’t know that I’d go so far as to call Anthrax a political band, but there’s certainly been a history of some political lyrics and themes from time to time. New songs like “Zero Tolerance,” “For All Kings,” and certainly “Evil Twin” maintain that – was that a conscious thing, where you sat down and decided to write a song about terrorism or something, or was it just that the climate that we’re living in right now dictated a darker tone in some cases?

Frank: Scott is our main lyricist, and he always comes in with a lot of things that we like or agree with, and yeah, it’s not only politics, but it’s the climate we’re living in, everything that affects us, day-to-day lives – the Stephen King references, stuff like that. I think one thing about Anthrax is that we’ve always had intelligent lyrics, and we’re not preaching or anything, it’s just how things affect us, personally, and I like that those heavy lyrics go with the heavy music.

Chris (ITL): It’s definitely something that’s always made you guys interesting – you’ve never been a band that takes on specific thematic concepts and only plays to those themes on every single record.

Frank: And the way to do that is just writing for yourself, as a fan. And hopefully other people will then understand that, and enjoy the music and the same ideas. We want to take you on a journey, and I think this record really takes you on a ride, it’s a rollercoaster, it gives you a high.

Chris (ITL): It’s very cohesive as an album, to sit and listen to from start to finish. I’m definitely a fan of “The Album.”

Frank: Yeah, that’s how I am, I listen to a full record and just enjoy it, I don’t listen to just one song or something.

Chris (ITL): So are you guys planning on doing a lot of tunes from this record live?

Frank: I am so stoked, we can’t wait to play this stuff live! We have to wait a little bit – the new single, “Breathing Lightning,” is out now and we’re going to start playing that live soon – and we can’t really do a lot more than that, because with the Internet, people would get the live stuff first, and I’d much rather they enjoy it live after they hear the whole record.

This Lamb of God tour has been great so far – it’s a great package, huge crowds every night, sold out – things are just a lot of fun right now.

Chris (ITL): That’s great to hear, man. I couldn’t be happier to see you guys kicking so much ass these days, and I can’t wait for the tour to roll through Chicago on January 30th! Congrats on a great record.

Frank: Thanks so much – and see you next week!

To get tickets to the upcoming show at the Aragon Ballroom, click here

Hey Chicago, Wanna Rockin' Getaway To Hangout And Jam With Ministry?! Top 16 Most Anticipated Concerts of 2016 (first half)