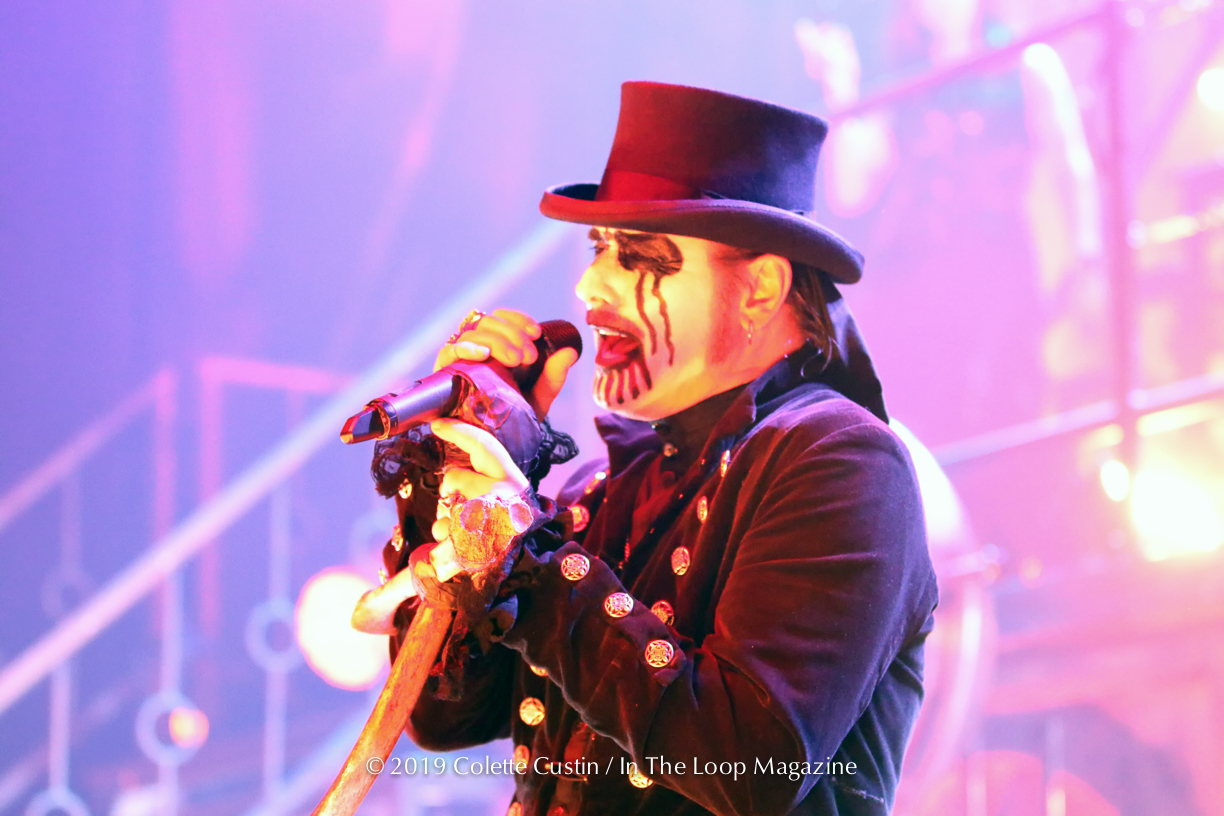 The resurgence of legacy heavy metal acts in the last few years has brought many welcome surprises, and perhaps none are more satisfying the return of the mighty King Diamond to the touring circuit.

Following a hugely successful ‘comeback’ tour in 2014 and 2015 that culminated in full performances of the King’s 1987 masterwork Abigail, King Diamond returned to the Riviera Theater on Monday night in promotional anticipation for his upcoming album The Institute, set to be released next year.

While the nature of The Institute is unknown as far as the conceptual elements go, the stage was one hell of a tease. A dungeon-like, metal cavern that looked like a cross between an aged hospital and Freddy Krueger’s boiler room hissed smoke and ominous glowing lights as Diamond emerged with his signature crossbones microphone, leading the band through a show that was as heavy on deep cuts as it was on hits. The addition of “Voodoo,” “The Invisible Guests,” and “Behind These Walls” showed that Diamond is fully plundering his back catalog to the delight of diehards everywhere, and the biggest surprise of the night came with set closer “The Lake,” a non-album cut from all the way back to 1986’s Fatal Portrait sessions.

The performance aspect was heightened by highlights from the many album narratives—the introductory funeral mass of the black horsemen performed over Abigail’s coffin that precedes “Arrival,” King’s evil grandma arriving returning from the asylum at the start of “Welcome Home.” The crowd even got a teaser from the new record in the form of “Masquerades of Madness,” which has all the hallmarks of a classic King Diamond song—haunting keyboards, creepy harmonies, and a succinct, catchy chorus—and came complete with the disturbing presence of a child in a creepy medieval mask leading the singer about the stage.

Guitarist Andy LaRocque, Diamond’s lead guitarist since the beginning of his solo career following the original Mercyful Fate days, is still in top form, as is the rest of the band (Mike Wead on guitar, Pontus Egberg on bass, and Matt Thompson on drums), shining a light on just how important musicianship has always been to King Diamond’s performances and albums. Much as it could be argued that the original Alice Cooper group helped to elevate the eponymous singer, Diamond’s complex arrangements have always had an almost classical approach, a focus on balancing dynamics with bombast. That approach has paid off throughout Diamond’s career, leading to a series of albums that are carefully crafted as opposed to pulled together from disparate sources and songs. All of that is to say that such an approach is ready-made for a live stage and provides ample opportunity for the singer to show off his impressive vocal range; the fact that King Diamond is regularly touring again and firing on his best cylinders shouldn’t be taken for granted by anyone who loves classic heavy metal.   All in all, this 2019 tour is a phenomenal achievement that played to all of the King’s strengths and left everyone in the house wanting more.

One could say that Diamond’s career (like any musician) could be divided into acts: there was the first act immediately following Mercyful Fate, the heyday of power metal that gave us timeless classics like Abigail and Them, followed by a second act that saw heavy metal largely go underground during alternative rock’s peak, a shift in attention that saw the best artists stay the course, for which Diamond was no exception, honing his knack for narrative songcraft with House of God, The Spider’s Lullabye, The Graveyard, and others.

It’s a wicked blessing for us all that the third act of King Diamond’s career has begun. The doors are about to open on The Institute, and it promises to be one of his best yet. Stay tuned.

For photos from the King Diamond show at the Riv, click here

A Mansion in Darkness

*Out From the Asylum* (intro)