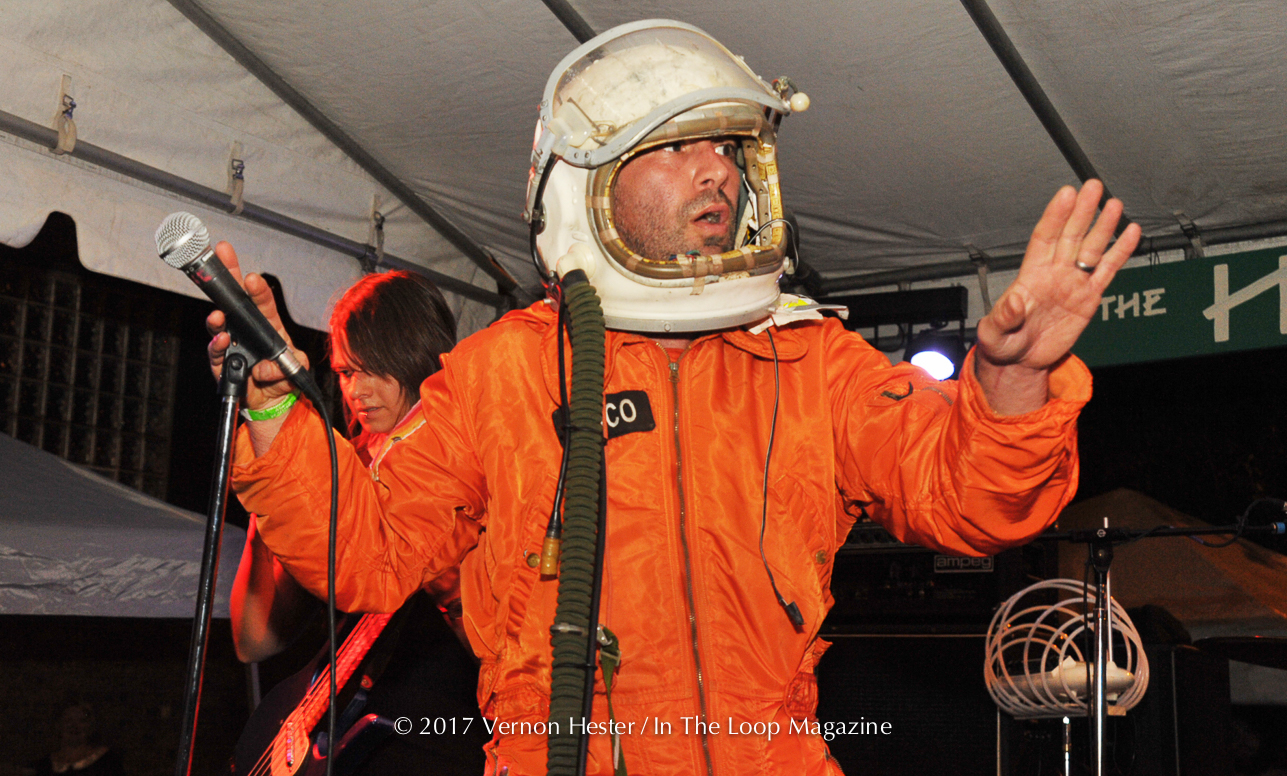 In my review of the first day of The Hideout Block Party which ran on September 30 I closed by stating “it was a hellava time.”

Day two of the festival made the first seem like a stroll down Partridge Path Lane with blue birds chirping and butterflies flitting about. Sure I knew that the Tutens (the owners) were full of frolic and good times but this time out, which served as the twentieth anniversary of Steve Albini’s Electrical Audio, could best be described as a flaming nuclear wreck and, well an even better time.

The first thing that clued me to what was to come was the band FACS, who were knee deep in their set when I got there. The group, which is made up of most of Disappears (Jonathon Van Herik, Noah Leger and Brian Case) make funky gothic art rock with less of the spookiness and more of the drama. What really threw me off was hearing their murk under an unforgiving sun in 90 degree heat and the entire set had a surreal vibe which was pleasantly off putting. Of course the sight of Steve Albini handing out grilled weenies in a white lab coat added to that strange vibe.

DIY favorites Meat Wave were really who I came to see, and their bruising set did not disappoint. Vocalist Chris Sutter has managed to harness his great-white-shark-bite vocals into a layered instrument giving him more nuance and shading in his delivery (in short, now he does not growl like a chainsaw ripping your face off). His co-conspirators Joe Gac (on bass) and Ryan Wizniak (on drums) have formed a cohesion which has dovetailed that voice and Sutter’s distinctive guitar playing into a big busy thunderous work of art. With all that growth they gleefully took the “easy” way out and opened with a muscular “Leopard Jet Ski” and “To Be Swayed” and gave the second day its first jolt of electricity. Then Shannon Wright got onstage and freaked everybody out.

After hearing her relatively new Divisions I didn’t expect much in the way of her performance (the album is actually very good and very quiet) but then she popped onstage with her drummer and tore into a set that was spellbinding, thrilling, and spontaneous. It hardly mattered what she sang (I couldn’t make out any of the lyrics) since her concentration and commitment to her performance were so griping. Attacking her guitar with aggressive skill she presented a stunning sight: an explosion of furious auburn hair, a scar of red lips, and a supple body which moved with spontaneity and grace. Seeing her glide across the stage like a manta ray while barking and jerking about didn’t feel like another performance but more like a narcotic rush.  The audience evidently felt the same way since there was a rather unsubtle quiet whenever she sang.

From there things got nuttier by degrees with Danielson Famile who looked like a bunch of overgrown Girl Scouts looking for a cookie sale. With all those shimmering harmonies and Pepsodent bright smiles they were amusing as all get out and, sandwiched in between sets by Dianogah and Nina Nastasia they brought a touch of  levity to the afternoon.

After Albini and the crowd sang “Happy Birthday” and had cheese cake, intergalactic surf punks Man or Astroman? tore into a set which could only be described as sheer mayhem, With bassist Coco the Electronic Monkey (Robert Delbueno) leering like a crack addled sailor and Brian “Birdstuff” Teasley trying and failing to project some sort of composure, their set was frantic, furious, and (thankfully) sloppy evoking the very essence of screwball comedy. It certainly didn’t hurt to have guitarist Avona Nova (Samantha Erin Paulson) careening on and off the stage with them while they fiddled with nifty retro 50’s sci-fi gizmos while whipping out their positively savage mix of surf, rockabilly riffs, and punk fury.

By this time I was completely whipped and after Astroman?’s drummer Brian “Star Crunch” Cansey tossed a martyred snare drum into the overflow crowd I was ready to pack it in. That didn’t happen once Marissa Paternoster and her band, Screaming Females got onstage to close the festival. The latest full length  Rose Mountain sounds like mainstream radio rock but the way Paternoster played and sang it gave it a searing bite that edged it toward hardcore punk.  It was loads of fun to watch the dynamic onstage with Paternoster in her usual black snarling, shrieking, and literally clawing her way through the songs and King Mike standing like an inanimate Gollum with his curls flopped over his eyes noodling away on his bass.

To say that The Hideout Block Party has merely returned is hardly saying enough. This particular hoe-down has become an era defining event and should have the local reverence of the annual lighting of the Christmas tree, the Chicago Blues Festival, and the start of baseball season in the summer. This town owes  Tim and Katie Tuten and the Hinchsliff twins a great debt.