Hallelujah! Ghost Gathers Its Congregation At The Riv 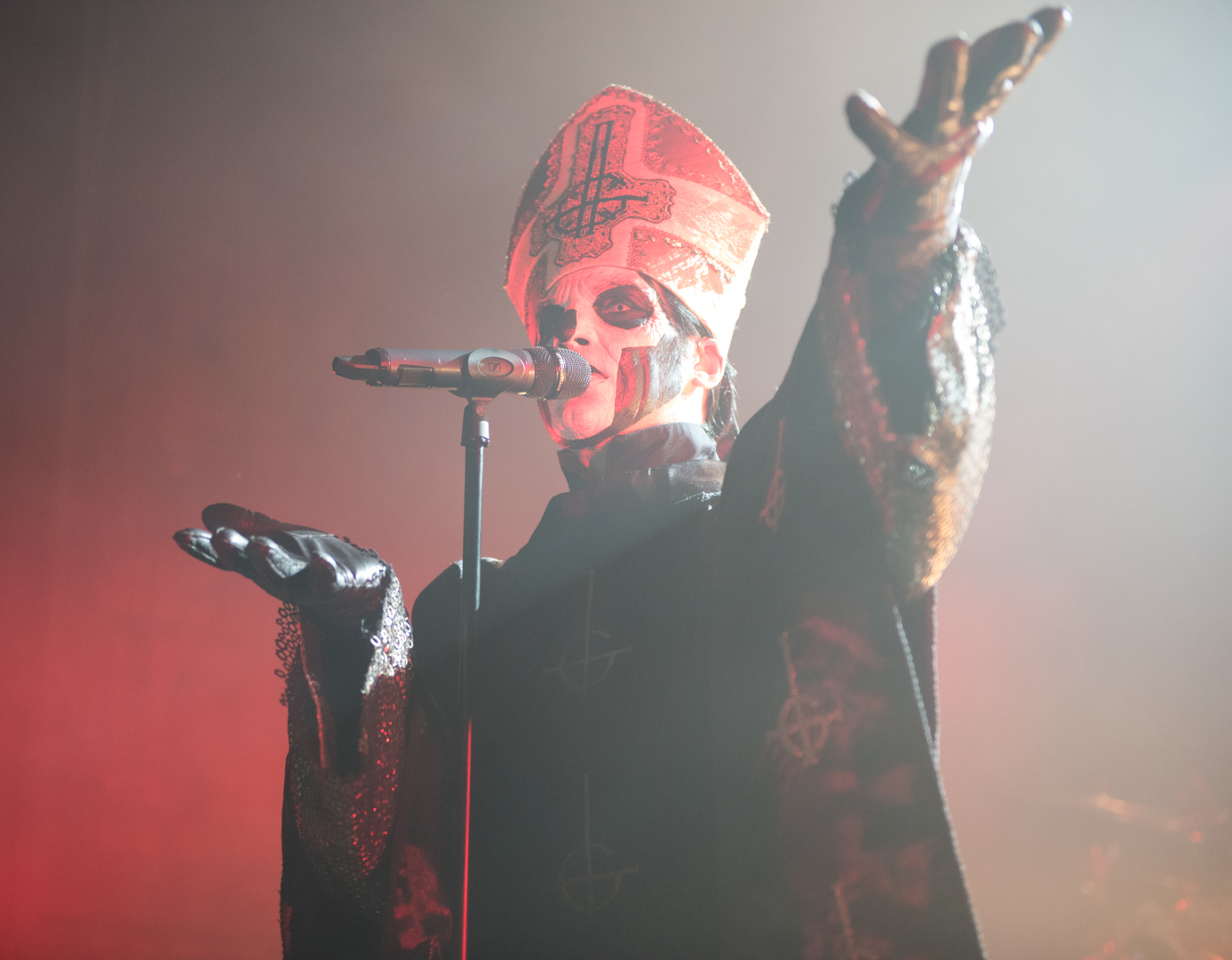 When it comes to rock n’ roll and heavy metal, let’s face it: we’re desensitized. Sure, occasionally, a Marilyn Manson or a Slipknot will come along and make everyone outside of the fan community fear that we’re nearing the end of days if such a band can be popular on a large scale, blah, blah, blah. Then a few years and a few records go by, and the controversy dies down.

One of two things happens at that point for just about every band in the world. One, they burn out. Two, they have a long-view of the fact that image and music must evolve if a band is going to stay relevant. For the best bands out there who have stood the test of musical time, number two manifests with a sigh of relief from their fans (and the inevitable cries of “sellout,” but that’s a bone to pick another time).

All of this is to say that shock only goes so far, and that even the best, most gimmicky image in the world has a shelf life. Which itself is to say that Ghost–the Swedish consortium of faceless ghouls led by Satanic pope Papa Emeritus III–is already taking the long view toward Door #2, and as such, delivered one of the best shows I’ve ever seen at the Riviera on Saturday, October 3rd.

Ghost’s themes are focused and clear – mainly that Christianity is an offensive sham and that following the “Devil” is the way to go. Not a new theme, but also not a theme explored in the more philosophical terms that Ghost employs. There’s no Slayer-style imagery of demon armies baptizing the faithful in blood – more a focus on ‘darkness’ as a means to self-empowerment and individuality, both themes that have been prevalent in much occult rock, though not typically with the kind of grace that Ghost has for three excellent records. Which, of course, allows them to reach a broader audience than if they were discussing such stalwart black metal topics as, I don’t know, raping corpses and desecrating churches.

In fact, Ghost’s music isn’t really black metal at all – it’s a more stylized approach to anthemic hard rock and (to my own delight) Italian prog rock from of the ‘70s. (Picture progsters Goblin penning hooky, radio friendly songs about taking communion from the dark lord himself and you’re almost there.) Only the most sour rock fan wouldn’t raise a fist for explosive choruses like the ones in “Absolution,” “Cirice,” and “From the Pinnacle to the Pit,” all highlights from Ghost’s new album Meliora (itself a Latin word for “better”), and all of which came across with even more grandeur on the Riviera Theatre stage than on record.

Of course, central to Ghost’s performance is their image, and it’s a simple one, but incredibly effective. Shifting their look slightly with each tour (something we’ll come back to), the Nameless Ghouls are wearing black bodysuits with metallic Devil masks this time around, a slicker and dare-I-say sexier look than the last tour’s dark robes and hoods. Papa’s makeup is slightly changed, but the vestments haven’t, and he’s quickly joining the ranks of the more charismatic frontmen in rock.

“We have a new album,” he said, introducing “Majesty,” and when the crowd roared with approval, he nodded. “Yes, it is very, very good. Better than most others, actually.” The setlist was a perfect mix of songs from all three Ghost records, with all but one song from Meliora making an appearance.

It would be remiss to say that the dynamic quality of Ghost’s sound and live show rests with the image, though it’s not hard to make the most of such a look. At no point was this truer than on “Body & Blood,” when he led two attractive young women dressed as nuns onstage and instructed the fans in front to behave themselves as the nuns administered communion…which they then did, carrying trays of wine and wafers through the photo pit and letting the crowd indulge.

The midway point of the set, when “Devil Church” transitioned into “Cirice,” Meliora’s debut single, that things really got interesting. Disappearing from the stage for a few minutes, Papa Emeritus returned – but without his Pope’s attire, clad only in a black suit with the skull-paint still intact. The second half of the show featured this new, stripped-down look, and no one in attendance seemed to care, instead continuing to sing every word of every song, garnering nods and appreciative, wicked smirks from Papa E. As the band capped the night with a one-two-three punch of “Zombie Queen” (surely one of the most rafter-shaking rock songs of the last decade), the oft-covered Roky Erickson classic “If You Have Ghosts,” and “Monstrance Clock,” which saw the entire Riviera Theatre singing “come together as one, for Lucifer’s son,” it was hard to ignore the mid-set shift.
But not in a bad way. Maybe this is just speculation, but I can’t help wonder if we’re seeing the first major step in Ghost’s imagistic evolution, one that could open them to a greater audience and would surely see them playing larger and larger venues as their music continues to gain popularity. So far, they’ve managed the incredibly difficult task of making ever-better records while expanding their fan base beyond the traditional metal community, which is not something one sees often. I won’t make wild predictions here – but I will say that if Ghost are playing arenas in a few years, savvily adjusting their look here and there, I won’t be a bit surprised. So, when the Black to the Future tour rolls back through Chicago as it’s rumored to in 2016, you’d better go so you can say you saw them when. Because it’s looking more and more like they’re going to be one of ‘those’ bands.

For more on Ghost, the tour and music, click here.

If You Have Ghosts