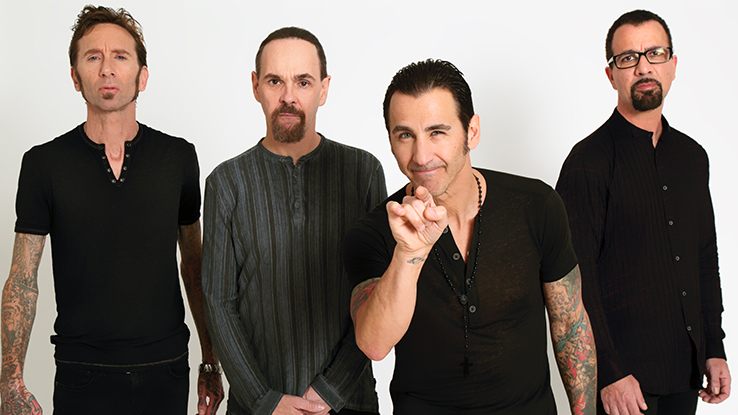 This summer, rock fans across the country should be prepared to be rocked hard when the GODSMACK/SHINEDOWN co-headlining tour comes their way. Produced by Live Nation, the six-week outdoor amphitheater tour stops locally in TINLEY PARK on FRIDAY, JULY 27 at HOLLYWOOD CASINO AMPHITHEATRE. The two multi-platinum rock groups are touring in support of their new chart-topping albums: Godsmack’s WHEN LEGENDS RISE(April 27 via BMG) and Shinedown’s ATTENTION ATTENTION (May 4 via Atlantic Records).

GODSMACK exploded onto the album charts with their latest release, WHEN LEGENDS RISE, the band’s seventh studio album and their first in four years. The 11-song collection, fueled by the Top 5 rock song and video “Bulletproof” plus the title track “When Legends Rise,” entered the Billboard Top 200 album chart in the top ten (#8), with four #1 placements on other charts: Top Rock Albums, Top Hard Music Albums, Top Independent Albums and Top Alternative Albums.

Listen to WHEN LEGENDS RISE on Spotify HERE.

WHEN LEGENDS RISE–recorded at their headquarters (GSHQ) in Derry, New Hampshire and produced by Erik Ron and Sully Erna—has been receiving critical praise worldwide. Included in Loudwire.com’s list of “2018’s Best Rock Albums…So Far,” writer Chad Childers proclaims, “The band is painting with a broader palette and delivering one of their most well-rounded albums to date. The single ‘Bulletproof’ was ready made for rock radio, while the titular ‘When Legends Rise’ is the sound of a band brimming with as much vitality as they’ve ever had. The adrenaline-fueled ‘Take It to the Edge,’ the road-burning rocker ‘Say My Name’ and the epic, buzz-generating ‘Under Your Scars’ could all find some time on the airwaves as well. When Legends Rise should give Godsmack an uptick in their career” (4/30/18). See below for more critical praise.

On the live front, the band is currently headlining various U.S. rock festivals this spring, receiving rave reviews from the fans and critics alike, with The Rock Revival declaring, “Godsmack is back with a vengeance, and their explosive live show left nobody disappointed” of their recent Fort Rock Festival set (Johnnie Crow, 5/4/18). 20 years after the release of their debut album and 20 million album sales later, GODSMACK are an even stronger animal than before.

The WHEN LEGENDS RISE track listing is:

“Every Part Of Me”

“Take It To The Edge”

“Eye Of The Storm”

Godsmack stand strong as 21st century hard rock titans. With an unbreakable spirit and diehard work ethic evocative of their hometown, the Boston quartet fought hard to secure a place in music history since first smashing their way on to the scene in 1998. To date, they’ve notched a staggering six #1 singles at mainstream rock radio, including “Awake,” “Straight Out of Line,” “Cryin’ Like A Bitch,” and “I Stand Alone.” Moreover, they’ve enjoyed 20 Top 10 hits at the format—the most of any act since February 1999–as well as four Grammy nominations, and were winners of The Billboard Music Awards Rock Artist’s of the Year in 2001.  Selling over 20 million records worldwide, the band has also unleashed three consecutive albums at #1 on the Billboard Top 200—namely Faceless [2003], IV [2006], and The Oracle[2010]. This places them in league with Van Halen, U2, Metallica, Dave Matthews Band, and Linkin Park who have also enjoyed the same streak. Moreover, the accomplishment on the road remains staggering with headlining sets everywhere from Mayhem and UPROAR to Rock on the Range. Godsmack released the successful and acclaimed 1,000 HP in 2014, and their domination continues with the release of When Legends Rise, their seventh full-length album in 2014. They still stand alone.