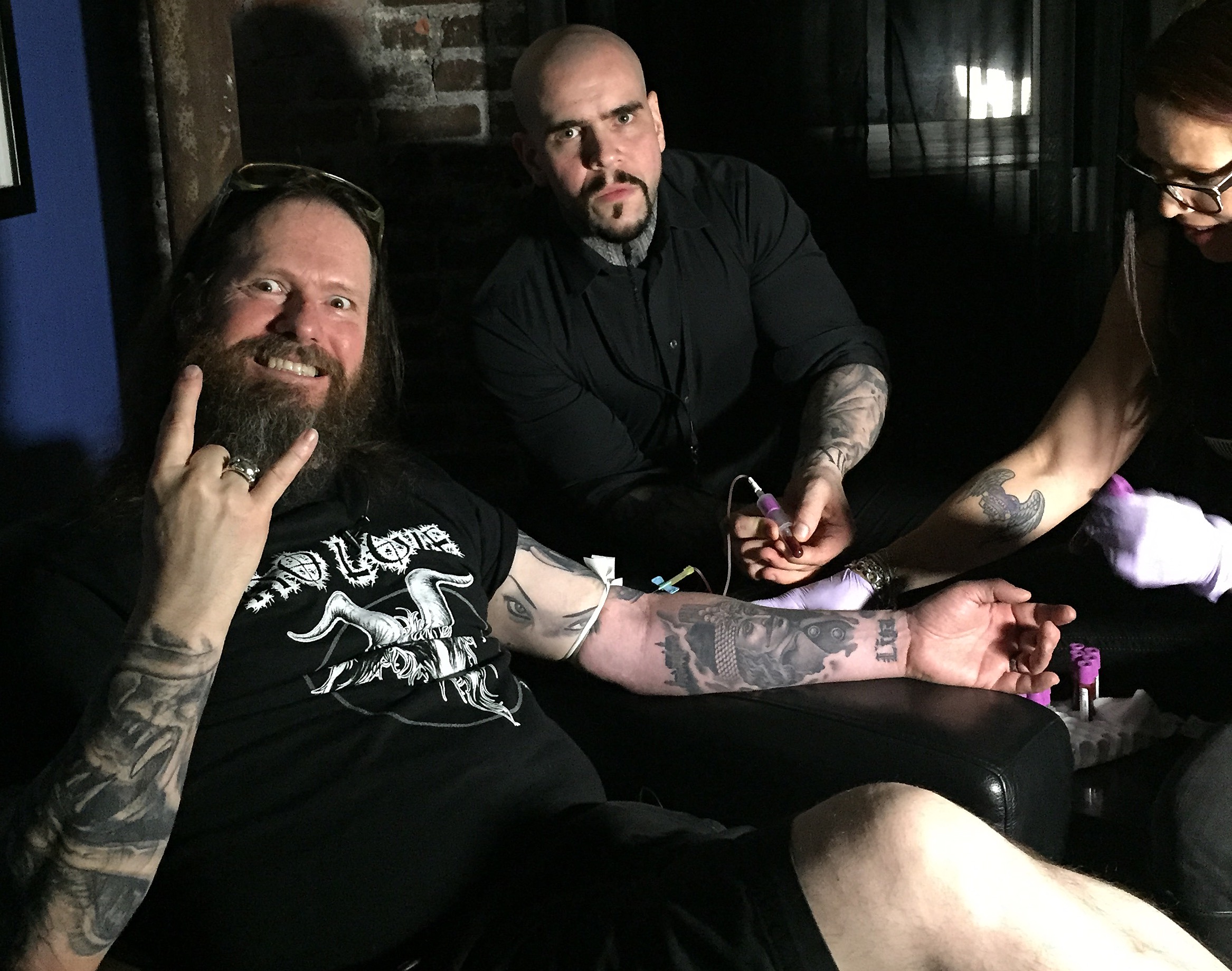 Gary: So how are things today?

Chris (ITL): Things are colder than hell here, actually – let’s hope it’s warmer by next weekend when you roll into town!

Gary: *laughs* I’ve been watching the weather, and yeah, it’s looks like it’ll be good.

Chris (ITL): So, I think you must be the hardest working man in metal, being in both Slayer and Exodus full-time.

Gary: Well, lately, I haven’t been working very hard. *laughs* When I’m doing the double-duty thing, yeah, then you can call me the James Brown of Thrash Metal!

Chris (ITL): Let’s talk Repentless – congrats! You guys really made an amazing record, and everyone seems to dig it, from critics to fans and on down.

Gary: Yeah, the record came out killer. You know, there are always people who have something to say, be it positive or negative, but overall, the response has been fantastic, and I’m proud to have been able to contribute whatever I could to it.

Chris (ITL): What was it like to step into that role with Slayer, in a studio context? Obviously, having been with them since 2011 (after guitarist Jeff Hanneman fell ill), you’re used to playing with them live, but I’m guessing that’s a very different dynamic.

Gary: I got the call to come down and do some lead tracks, and I went in with maybe a couple of ideas, but you know, I pretty much went in with a blank canvas – I just started shredding away, and everyone just let me go and do whatever I wanted! Finally, I was like, ‘well, what do you guys think?’ and Tom was like, ‘I thought you nailed it twenty takes ago!’ *laughs* And I said, ‘oh, well, let me know that stuff, because I’ll just keep rolling.’ I think a lot of guitar players probably do that, they’re too critical of themselves, and sometimes we’ll let something really good vanish because we think we can do something better, or different, so it’s always good for someone to let us know when to stop fucking with it, you know? I only have like five licks. *laughs* I’m not one of those guys who has a tool chest full of riffs – I have some in the junk drawer!

Chris (ITL): Ha! Nothing wrong with that. Going into that process, had you heard any of the material at that point, any demos or anything?

Gary: Some of them I had, yeah, but for some of them, it was a totally new experience, which was kinda cool.   It allowed me to hear things sort of from a fan’s perspective. It was the same thing with the last Exodus album – I was in Europe with Slayer when Zetro was doing his vocals, and the songs that Lee had written for the album I had never heard in any way that was complete, so I first heard them with vocals, phrasing, all of that for the first time the same way you would have, and that’s never happened to me in Exodus, to hear a finished product that I hadn’t heard a million times. It was the same way with this, I went in, they hit play, and all of a sudden, vocals and everything would kick in – and you’re just like, wow, that’s awesome.

Chris (ITL): In terms of the writing process on Repentless, I know that Kerry wrote the songs this time around and you just came in for the leads, but is that something down the line that you see changing? Do you anticipate/want/expect to be a part of that writing process?

Gary: I’ve certainly never been one to have a shortage of material, so yeah, it’s a bit premature, but down the line if Kerry and Tom want me to, I have about as good of an insight into Slayer’s writing style by now as just about anybody. I think I could write some things that fit right in, sure. But right now, of course, we’re focused on the tour.

Chris (ITL): In terms of the tour, can we expect a lot of stuff from the new record, will the setlist be at all similar to what Europe saw last fall?

Gary: There’ll be some changes, you know, Kerry always likes to change things up a bit and surprise me at the last minute, throw something my way that we haven’t played in a long time, or sometimes something I’ve never played, so I get down to work and make it happen.   I have a pretty good list of stuff to work on – I’m sitting here in my living room right now with three guitars and I’m doing my homework. *laughs*

Chris (ITL): What’s a favorite Slayer song of yours to play live?

Gary: Hmm, I like when we pull some things out that we don’t play a lot…but I’ll say “Hell Awaits,” that’s probably my favorite.

Chris (ITL): And after the U.S. tour, are you hitting festivals in Europe?

Gary: Yeah, we skipped the whole European festival circuit last year, and it was kinda cool to get do a festival tour stateside. But then, you spend a year away, and you miss it – it’s fun, and you get to see a lot of fantastic bands, and it’s one of those places where I see a lot of friends, and that’s where you run into them, the big European festivals, so I’m looking forward to it.

Gary: Yeah, totally – I’m one of those guys who’s old enough now to remember what it was like to actually do your own headlining tour of Europe in the summer. Now, it’s a festival tour, and you try really hard to put some headlining dates in there, which, due to distance limitations and stuff like that, it’s gotten tougher. I do kinda miss being able to do my own headlining tour in the summer, but then again, you walk out onstage sometimes and it’s 60,000 people, which doesn’t always happen when you’re headlining.

Chris (ITL): So, your other big news recently – your blood guitar!   Tell me how this amazing thing came to pass.

Gary: Brian Werner from Vital Remains is a good friend of mine, and he put me in touch with Vincent Castiglia, who’s one of the world’s foremost artists when it comes to all things dark – he paints exclusively in blood. And it really just started as a conversation – ‘dude, do you know how sick it would be to do a guitar like that??’ So I ordered one of my signature models in white, and after discussions with Vincent about stylistically where we wanted to go with it, he came out to one of the Slayer shows in New York, pulled 18 vials of my blood, and we went from there. It was all a learning experience for Vincent, too, as far as how to paint on guitar – you know, liquid doesn’t absorb like it would on canvas or something, so trial and error, they had to coat the guitar, some surface stuff to give it absorption quality, so it wouldn’t just push the blood around. It’s a real work of art.

Gary: Yeah, you know, it’s a one-of-a-kind Vincent Castiglia original, on a fucking guitar. It’s insane. I’ve upped the bar a little, I think, on what you can do with a guitar. I was speechless when I finally saw it in person.

Chris (ITL): So are you using that guitar on the Slayer tour?

Gary: Oh, yeah! It’s being delicately clear-coated as we speak.

Chris (ITL): And will there be a consumer version?

Gary: Yeah, we are going to do a reproduction of it. I’m not coughing up 18 vials of blood every time! 18 vials isn’t that much, actually, even though it sounds like I opened a vein. But, as far as the blood goes, to quote “Highlander” – there can be only one!

Gary is currently out on tour with Slayer in support of the new record, Repentless. They will be in Chicago for two dates – Feb 19th & 20th at the Riviera Theatre.

For more on Gary’s guitar, the artist who created it and what’s next, click here

For photo of Slayer live in Chicago, click here