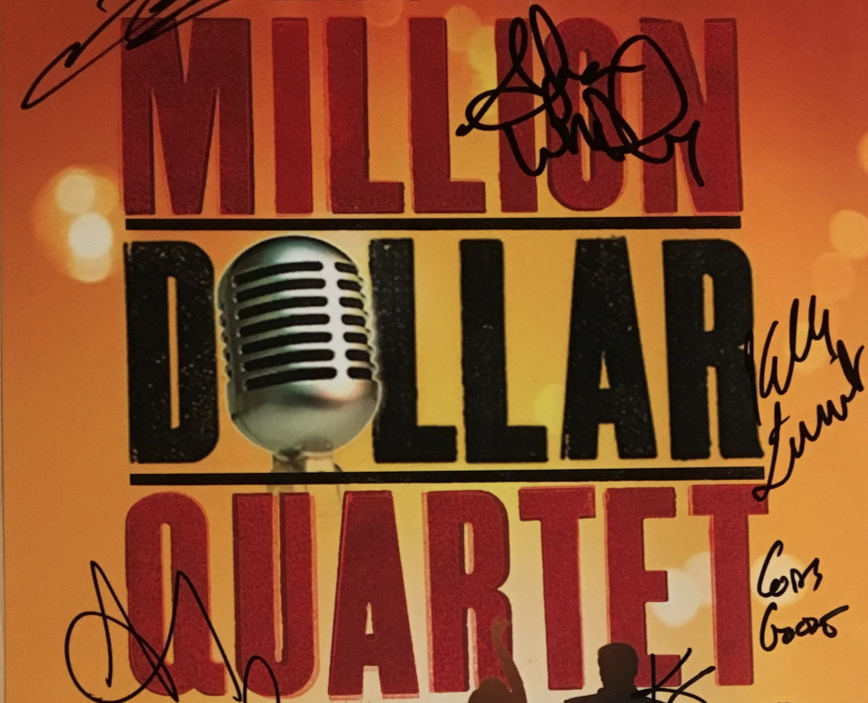 This week we  have a cast signed poster from the musical, Million Dollar Quartet.  Also included are guitar picks from the show, a button and a souvenir fan and booklet.

For your chance to win, just “Like” our Facebook page.  Random winner drawn and will be notified October 23th, 2015.

Here is more about the show, performers and location:

On December 4, 1956, these four young musicians gathered at Sun Records in Memphis for what would be one of the greatest jam sessions ever. MILLION DOLLAR QUARTET brings that legendary night to life, featuring a score of rock hits including “Blue Suede Shoes,” “Fever,” “That’s All Right,” “Sixteen Tons,” “Great Balls of Fire,” “Walk the Line,” “Whole Lotta Shakin’ Goin’ On,” “Who Do You Love?,” “Matchbox,” “Folsom Prison Blues,” “Hound Dog” and more.

This thrilling musical brings you inside the recording studio with four major talents who came together as a red-hot rock ‘n’ roll band for one unforgettable night. Don’t miss your chance to be a fly on the wall of fame… at MILLION DOLLAR QUARTET!

Brandon Bennett (Elvis Presley), a native son of Ponchatoula, Louisiana, began his singing career as a small boy, influenced mainly by his great-grandfather. His talent, along with his natural resemblance to The King of Rock ‘n’ Roll, has enabled him to perform with legendary stars like The Jordanaires, DJ Fontana, The Sweet Inspirations, and more. Brandon has been honored with several international awards, including prestigious honors from Elvis Presley Enterprises, Inc. He joins the cast of MDQ after performing for the past two years with the stage production The Elvis Story in Quebec, Canada. Go to www.brandonbennettlive.com

Adam Lee (Johnny Cash) has always loved two things — music and an open stretch of highway. Growing up an Air Force brat, he spent his youth travelling the world and got that ramblin’ fever early. He hit the road as a drummer at age 20 and never looked back. An accomplished songwriter with three releases of original material, he’s spent the past six years touring the U.S. and Europe promoting his own brand of Americana and is thankful to his family for their endless support. More information available at www.adamleeband.com.

Lance Lipinsky (Jerry Lee Lewis) While other kids were doing their homework, Lance was studying his dad’s record collection of people like Elvis, Roy Orbison, and his hero, Jerry Lee Lewis. These strong convictions for the past consumed his lifestyle and dedicated his career to the modern underground Rockabilly movement. Now at age 24, this Texas native combines these styles in his own original music similar to early rock ‘n’ roll, classic country and even a touch of 1960’s pop. His energetic live shows have led him all over the world, even to making his national television debut at the original Ryman Grand Ole Opry in Nashville, TN. Visit www.lancelipinsky.com for updates on his first album recording, which with use all analog equipment to emulate the timeless 1960’s sound.

Shaun Whitley (Carl Perkins) is thrilled to be a part of this production. He is a multi-instrumentalist, actor, composer, and Jeff-nominated music director. Some Chicago credits include: A Midsummer Night’s Dream (Flute/Thisbe) with Chicago Shakespeare Theater, Pump Boys and Dinettes (Jim) with Drury Lane Theater – Oakbrook, Buddy: The Buddy Holly Story (Tommy, u/s Buddy Holly) with Drury Lane Theater – Water Tower, Uncle Vanya (Telegin) with TUTA, and Cotton Patch Gospel (Bass/Mandolin) with Provision Theater. He studied acting at RADA in London. Thanks to the producers and creative team for this amazing opportunity. Love to both of his families, and most especially to Meg.

Robby Kipferl (Elvis at some performances) is excited to be returning to the Chicago production. Favorite roles include Million Dollar Quartet National Tour, South Pacific, Beauty and the Beast, The Sound of Music, and The Will Rodgers Follies. He is thrilled to be performing as The King in his hometown. www.robbykipferl.com.

Chris Daminao (Johnny Cash at some performances) Chris Damiano is tickled pink to be back with the cast of Million Dollar Quartet. When not playing Johnny Cash, Damiano enjoys gardening and cooking. Love to Laura and the family.

Andy Ahrens (Sam Phillips) is extremely excited to be joining the creative team of Million Dollar Quartet. Previous local credits include Hamlet and Comedy of Errorsat The Chicago Shakespeare Theatre as well as film credits such as Dead Drawand Jupiter Ascending. Thank you to my loving family, especially Dusty Lee!

Kelly Lamont (Dyanne) is ecstatic to be back in Chicago playing the role she originated in 2008. Since then she’s toured with MDQ in over 125 cities in the U.S., Canada and Japan. Kelly dedicates all her performances to her mom, her angel in the lights. www.kellylamont.com

Patrick Morrow (Fluke) is happy to be joining MDQ Chicago after two years on the National Tour. He has drummed for Wanda Jackson, Dale Hawkins, Joe Clay, The Two Timin’ Four, The Bellfuries, Big Sandy, Milwaukee Repertory Theater, and toured with Little House on the Prairie: The Musical starring TV’s Melissa Gilbert.

Chuck Zayas (Jay Perkins, Bassist) has been performing for more than twenty years as a bassist, singer, songwriter, session player, band leader and producer. He plays bass and is lead vocalist of his band The Midnight Ramblers. He’s an original member of the Chicago cast.

John Countryman (U/S Jerry Lee Lewis). A North Carolina native, John is thrilled to be returning to the Windy City! He would like to thank his Mom and family for all of their love and support. John would also like to thank his wife, Jennice, for being an inspiration in love and in life.

Kurt Jenkins (U/S Carl Perkins/Elvis Presley), is ecstatic to make his Million Dollar Quartet debut! Recently, Kurt has been thrilling audiences across the country as Buddy Holly in the Equity National Tour of Buddy! The Buddy Holly Story. Other Buddy productions include Ogunquit Playhouse and Pittsburgh CLO. Additional theatre credits: Godspell (Jesus), The Fantasticks (Matt), and Bat Boy (Bat Boy). Kurt also studied Film Production at the University of Central Florida (B.F.A.) and performs his original music under the name Skyway Spirit. Kurt would like to thank his family and friends for their encouragement, patience and tough love. Visit Kurt at www.skywayspirit.com

Travis Williams (U/S Johnny Cash/Sam Phillips) is excited to join the amazing production of Million Dollar Quartet! Hailin from Ohio, Travis has been active in the Chicago arts community for several years, and is a proud company member with Theatre Seven os Chicago. Some Chicago credits include the world premiere of the Quiet Man Tales at the Chicago Theatre, Timeline Theatre’s production of The History Boys (u/s Irwin), and The Water Engine with Theatre Seven of Chicago. Travis is an actor, playwright, and musician. Love and thanks to his wife, Elizabeth.

Kelsey Burd (U/S Dyanne) is so excited to join the Million Dollar Quartet Family! Kelsey was recently featured in the New York Musical Theatre Festival and with Emursive Theatre Company in NYC. She is thrilled to be back where she grew up in the Midwest, living and performing in Chicago.