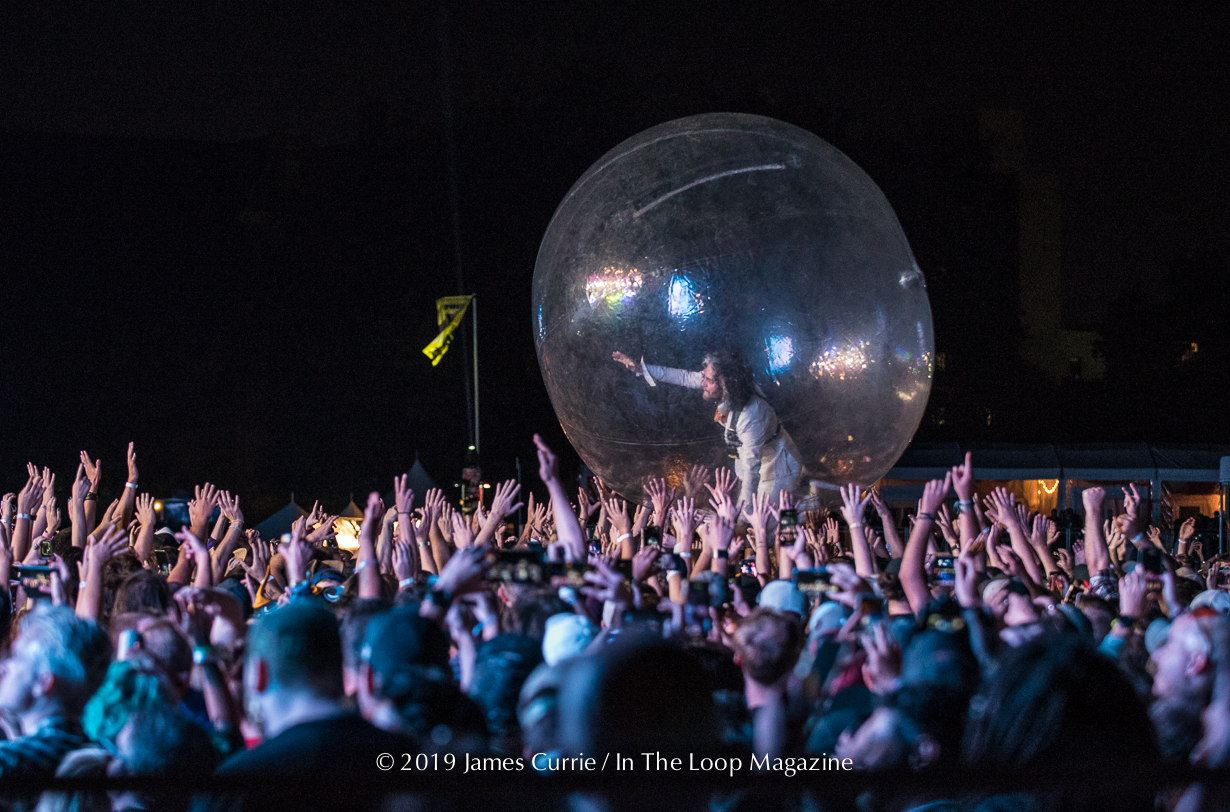 As anniversaries in Chicago go, none was more anticipated than the 15th annual Riot Fest, and for the most part, it didn’t disappoint, with stunning performances aplenty by both seasoned veterans and promising up-and-comers. Returning to Douglas Park for a fifth year, the three-day, genre-bending festival was a perfect balance of old, new, and experimental.

Friday began with a flurry of punk rock and indie pop, with Senses Fail performing Let It Enfold You and The Get-Up Kids and Lucero offering solid sets under the afternoon sunshine. Dashboard Confessional’s album play of The Places You Have Come to Fear the Most saw a bit of a shakeup, with a bearded Chris Carabba changing up both the sequencing and arrangement of that album’s songs – an engaging idea, and one that offered a fresh approach if proving to be mildly divisive amongst fans.

And then, the elephant in the room: Friday’s sound on the Riot and Roots stages, which caused a social media uproar as sets by The Flaming Lips, Blink 182, and a few others fell victim to unreasonably low volumes for festival headliners. Indeed, standing halfway between the front and back of the park, Blink’s set was nearly inaudible, a certain disappointment for those who had waited a year for their return after last year’s last minute cancellation due to Travis Barker’s injuries. (Numerous news outlets blamed the wind, but we’ve all been to festivals before, so let’s not kid ourselves – there’s a difference between the interaction of wind and sound waves and something simply not being loud enough. This was, most assuredly, the latter.)

To be fair, those sets were a raucous, absurdist start to a weekend that saw huge tonal swings as far as the overall approach and delivery by the headliners, and both were well-received. Both were riding full-album sets, with The Lips delivering a kaleidoscopic performance of Yoshimi Battles the Pink Robots, complete with ringmaster Wayne Coyne riding a giant bubble into the crowd and a huge pink robot taking center stage for a number of the album’s showpieces. Blink came in hot with a blazing set that saw their 1999 punk-pop classic Enema of the State played in its entirety, in addition to an encore overflowing with additional hits, not the least of which was new single “Darkside,” boding well for their forthcoming album Nine. For those naysayers still clamoring for Tom Delonge’s return, Chicago’s own Matt Skiba of Alkaline Trio has filled that void confidently, offering his own similar but unique style on classics like “All the Small Things” and “Dumpweed.”

Saturday saw blue skies and an armada of stalwart thrash metal as Anthrax, Testament, and the mighty Slayer owned the Riot stage, drawing massive crowds that made a compelling argument for a heavier metal presence in the future. Scott Ian pulled double duty as his side project, The Damned Things, took over the Rebel Stage and turned the entire area into a giant moshpit swirling at the edge of the carnival.

Senses Fail delivered a full-album performance of From the Depths of Dreams to a wild crowd that was ready for the smaller Rebel Stage, more than making up for any sound issues during Friday’s set, while Surfer Blood offered a tight, hooky set of California power-pop, pulling several cuts from their 2010 indie classic Astro Coast as well as dipping into some new material. Maintaining a tradition of introducing legacy cult acts to a broad, varied audience, British ska pioneers The Selecter offered a full album play of their 1980 debut Too Much Pressure, and they were undoubtedly one of the surprise hits of the day, playing to a massive crowd on the Radicals stage with their blend of punky but danceable politics.

But the day—and certainly the night—belonged to Slayer. Taking the stage to a backdrop of inverted crosses and pentagrams, the kings of Satanic thrash metal delivered a ninety-minute set that surely made the crowd (possibly the largest of the weekend) realize how much the band will be missed when they’re gone after their farewell tour ends later this year. Guitarists Kerry King and Gary Holt cranked out savage riff after riff on classics like “Black Magic,” “War Ensemble,” “World Painted Blood,” and “Hell Awaits” before a wall of fire that could be felt from the gigantic mosh pit in which, it appeared, only the strong were likely to survive.

(One fan noted how he and his girlfriend had to crowd surf their way out of the pit just to escape it, being carried over the barricade by security guards who were more than earning their pay on Saturday.) Deeper cuts like “Evil Has No Boundaries” and “Gemini” satisfied the diehards, and bassist/vocalist Tom Araya, always a man of few words, took a few moments to bask in the crowd’s adulation with a wry smile before exiting the stage for the final time in Chicago. The birth of thrash metal lies with only a handful of bands that formed in the early 1980s, but only Slayer took the genre to the darkest, fastest, and most extreme depths. Their absence will loom large in the metal world, and their set at Riot Fest was one of the most memorable in their more than thirty years of visiting our fair city.

Perhaps the most varied and stacked lineup of the weekend, Sunday was another beautiful if sometimes overcast day, and the threat of rain held off, mercifully, without derailing any of the sets. And what sets they were, with at least one that will go down in the Riot Fest history books. Skating Polly and Guided by Voices threw down their best alt-rock gauntlets for upbeat, rowdy crowd singalongs, and Nick Lowe’s brief but catchy set (backed by Los Straitjackets) was a masterclass in early ‘80s powerpop. One of the schedules best kept secrets was the early afternoon set by Kentucky garage-rockers White Reaper; the band’s hook-drenched rock called to mind early Tom Petty mixed with the pop-punk of early All-American Rejects, and the formula was a winner from top to bottom.

One of what could be considered the ‘big four’ of shoegaze (alongside My Bloody Valentine, Slowdive, and Swervedriver), Oxford quartet Ride had one of the most mesmerizing, sonically-perfect sets of the weekend. Currently on tour supporting their new album This is Not a Safe Place, guitarist/vocalist Andy Bell led the group through classics like the expansive “Leave It All Behind” and new tracks “Future Love” and “Jump Jet.” Bell’s interplay with guitarist Mark Gardener showcased the depth of the band’s arrangements, and given the size of their crowd, Riot Fest should make an effort to get a little more shoegaze into the annual mix.

Capping a weekend of unusually strong headliners even by Riot Fest standards, The Raconteurs took the stage for their only Chicago date in support of new album Help Us Stranger, and if ever there was a case for feeling bad on behalf of anyone who missed a set, this was it. The ever-evolving force of nature that is vocalist/guitarist/Third-Man guru Jack White again made a case for his position as arguably the most dynamic performer currently in the game, and while his projects all offer fascinating approaches to his core elements of Southern blues and roots country, it’s not a stretch to say that his work with singer-songwriter Brendan Benson has been his best, as Benson offers a crooning, folk-ish foil to White’s ferocity.

And the foursome (which also includes drummer Patrick Keeler and bassist Jack Lawrence) has clearly transcended their first two records in terms of arrangement and performance with Stranger in a set that drew from the new record while still throwing out a handful of gems from both their 2006 debut and 2008’s Consolers of the Lonely. New tracks “Bored and Razed” and “Sunday Driver” were fuzzy, furious freight-trains, while “You Don’t Understand Me,” a deeper cut from Consolers, was a rare moment of piano-driven melody that really let White and Benson’s interplay shine. By the time the set concluded with a performance of “Blue Veins” to melt the flesh right off your skull (with any luck, the band will find a way to release this, surely one of the best performances in recent Riot memory) and ubiquitous singalong “Steady As She Goes,” further evidence had been laid at Chicago’s feet that the worlds of rock, pop, blues, and true country have been made a better place by White’s nearly bottomless influence.

All in all, Riot Fest’s 15th anniversary proved to be another fun ride through genres and eras, and if we can step back and reflect, one could almost make the case that the festival has gotten too big. The bands are varied and a huge draw for all manner of ticket buyer, and the fest has certainly made itself feel at home in Douglas Park. However, stunningly long merch lines (as much as 60-90 minutes in some cases) as a result of poor cell reception in the area, along with the sound problems on Friday (which were, evidently, easily fixed by Saturday, derailing the ‘wind’ theory in short order, as volume levels were arena-loud for the remainder of the weekend) couldn’t help but make you think that tightening the focus a bit in coming years might be worth considering. For the most part, punk and metal acts drew heavily and there was a good deal of crossover in terms of crowd.

Riot has always been the festival for the grownups who can’t bring themselves to face the prospect of hipster Armageddon at Pitchfork or the high school behemoth that Lollapalooza has become. And while it enjoys a somewhat ageless demographic, from a crowd standpoint, this year felt closer to a ‘there to be seen’ gathering than in previous years. Trying to continually expand the reach is noble, and worthwhile, but if it isn’t kept in check, all roads will inevitably lead to Lolla 2.0, which is the last thing any real music fan wants. Withdrawing from an all-things-to-all-people approach, even just a little bit, could make the years to follow some of the greatest in the already prestigious history of the fest.