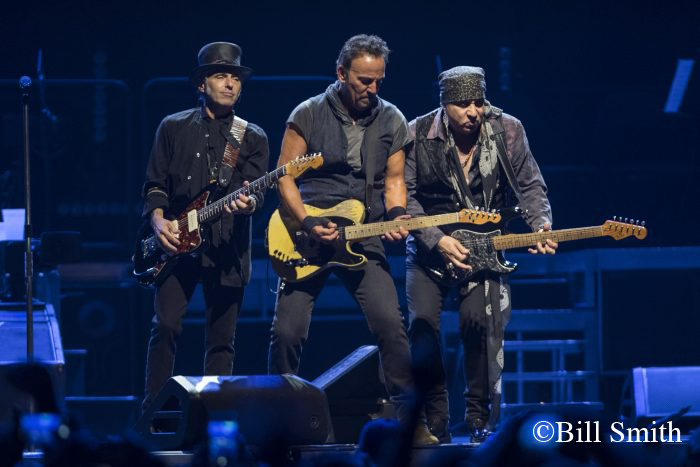 The Boss and his mighty ensemble arrived in Chicago again on Sunday as their tour commemorating landmark album The River winds to a close, and the band blazed through a three and a half hour set visiting every corner of their catalog.

Part of what makes Springsteen’s live show and story-songs so universal and relevant is his ability to connect with his audience on so many different levels.   River deep-cuts “I’m A Rocker” and “Cadillac Ranch” are pure, fun, party rock, “Rosalita” and “Tenth Avenue Freeze Out” give the band a chance to show off their chops even more than usual, and tracks like “Jack of All Trades” and “Death to My Hometown” offer catharsis through Springsteen’s well-documented worldview of the Everyman, the hard-working American who watches—often helplessly—as the political and social tides of his country ebb and flow. This was perhaps more relevant here in Chicago than anywhere else on the tour as the band downshifted into a wrenching rendition of “American Skin,” a song about the 1999 wrongful shooting death of Amadou Diallo by NYC police, followed by “Murder, Incorporated,” one of Springsteen’s most unsung rockers. Given the recent clashes between citizens and cops in our fair city, the context wasn’t lost on the sold-out crowd.

Springsteen’s penchant for storytelling is what he’s probably best known for, and that was on full display as the band threw down some of the strongest tales in their canon: opener “New York City Serenade” complete with a string section, “The River,” Born in the U.S.A. outtake and fan favorite “None But the Brave,” and the epic “Backstreets” were all spot-on reminders of how deftly the man can set a scene.

And of course, the band. The E-Street Band is untouchable.

Let’s just get that out of the way. I don’t say it just to grab attention, be dramatic, anything like that. As rock n’ roll bands go as of this moment in time, there is no band on earth that can match their level of precision, showmanship, swagger, or road-tested perfection. Try to find one. Actually, no, you know what? Don’t waste your time.

Truly, what more can be said, at this point in history, about the E-Street Band?   Rising from the streets of New Jersey in the mid-70s to take over the world, guitarists Steven Van Zandt and Nils Lofgren, pianist Roy Bittan, drummer Max Weinberg, and bassist Garry W. Tallent (along with guitarist/violinist Soozie Tyrell, keyboardist Charlie Giordano, and Jake Clemons—nephew to the late Clarence Clemons—on sax) are such a tight unit that it’s almost impossible to measure, and Springsteen’s talent as a bandleader always gets a chance to come to the fore, particularly when the ‘sign request’ portion of the show comes along, with the Boss often coming out into the crowd to retrieve signs requesting everything from the most beloved to the most obscure tunes in their canon.

Thanks to fan requests, the United Center received a rarely played “Mary’s Place” from 2002’s post-9/11 retort The Rising, the aforementioned “None But the Brave” (perhaps my favorite Springsteen song of all time, dating back to the early bootlegging days!), and a version of “Waitin’ On A Sunny Day” that was made all the more fun by the little girl who requested it—the second Springsteen pulled her up on stage to sing a chorus, she grabbed the mic and commanded the 50,000+ crowd like she’d been doing it for years. I don’t know who she was, but she’s a rock star in the making.

Bruce Springsteen & the E-Street Band are wholly unique in the world of music – a band that exemplifies the best qualities of half a dozen genres, a band that can emotionally connect with a massive crowd at an effortless level, and, perhaps most importantly, a band that still, after over forty years, clearly loves playing together.   Let’s hope they’re also a band that doesn’t intend to stop touring any time soon.

Prove it All Night

My Love Will Not Let You Down

The Ties That Bind

Racing in the Street

None But the Brave

Out in the Street

Death to My Hometown

Jack of All Trades

Waitin’ On A Sunny Day

Dancing in the Dark