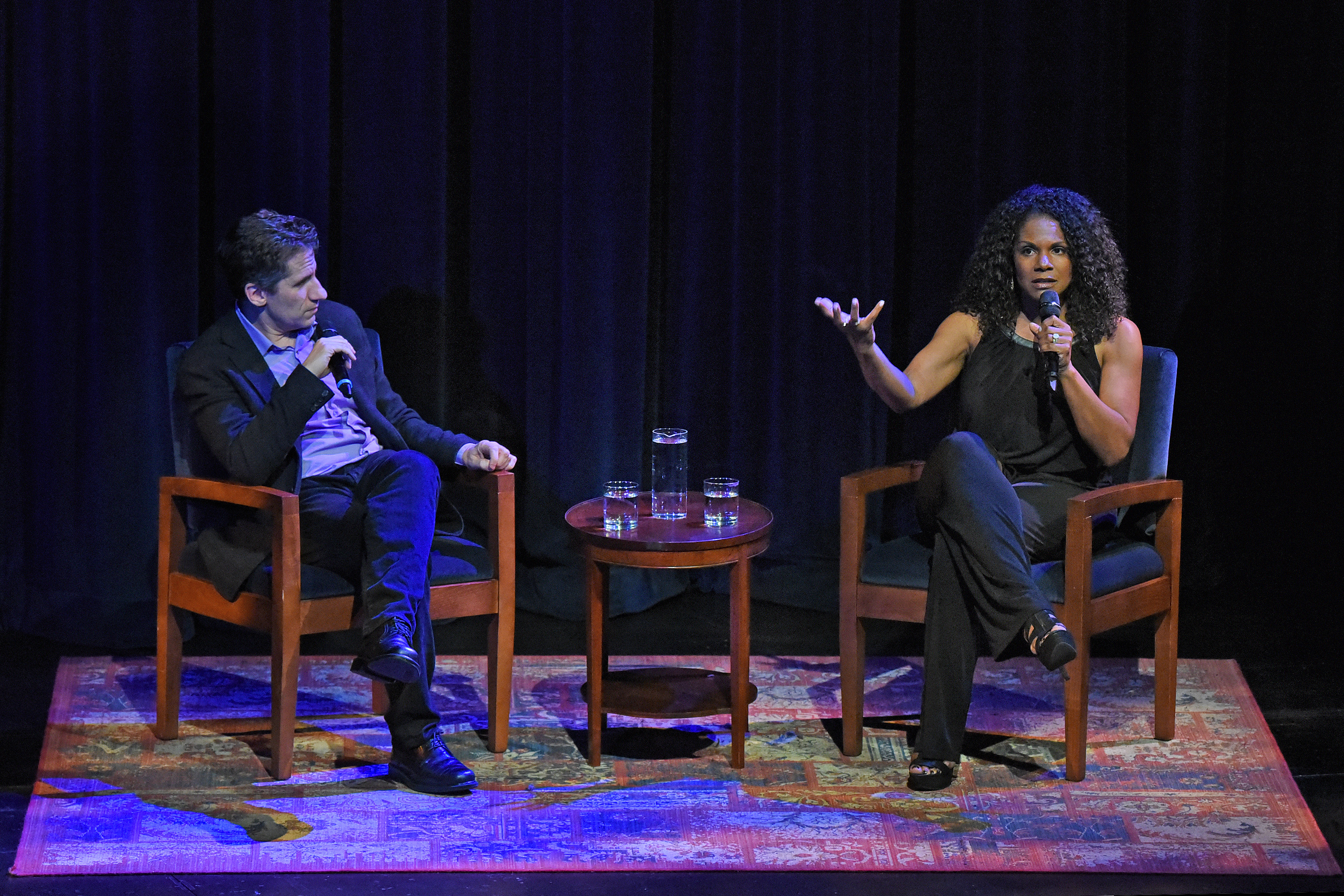 The term “National Treasure” is one of the more irritating cliches in the performing arts, yet it is entirely appropriate when applied to the luminous Audra McDonald. An absurdly talented singer and actress, McDonald has not only won more Tony awards (six!) than any other actor, but she is also the first person to win a Tony in all four acting categories. With similarly impressive achievements in television and film, her’s is a talent that is both deep and wide.

So suffice to say, expectations ran high high for McDonald’s May 22 concert at Steppenwolf, although nobody in the theater’s downstairs performing space was surprised that McDonald and host/pianist Seth Rudetsky obliterated any expectations one may have had.

Presented as part of Steppenwolf’s LookOut Series, the concert was half Broadway revue, half Moth Radio Hour in how McDonald and Rudetsky conceived it. With nothing but Rudetsky’s lively piano accompanying her, McDonald’s soaring soprano covered some of the finest songs from her musical theatre repertoire, ranging from “I Could Have Danced All Night” from ‘My Fair Lady,’ to “Summertime” from ‘Porgy and Bess,’ to the astonishingly beautiful Adam Gwon song “I’ll Be Here.” Additionally, McDonald’s husband, the talented singer/actor Will Swenson, joined the duo for a couple of numbers, including a rousing rendition of “The Pirate King” from ‘Pirates of Penzance.’ But in the end, it was McDonald’s show, and with each number, she reminded the audience of how truly special it is to watch a stage performer at the height of their powers. Her facial expressions, her gestures, the way her eyes swayed with the emotional timbre of each phrase – there’s truly nothing like it, whether she was singing Kander/Ebb or cheeky treatises on Craigslist.

But amazingly, as captivating as McDonald’s singing was – and clearly, I could go on and on with accolades about it – her conversations with Rudetsky were just as enjoyable, as they engaged in witty repartee about her fascinating adventures through the wide world of entertainment. For instance, there was McDonald’s admission that her older daughter, at the ripe age of three, stated that McDonald’s singing made her ears hurt; there was the time that McDonald brought her daughter to see her perform in ‘Porgy and Bess’ only to remember, shortly before taking the stage, that her character – a drug-addled prostitute – was not the best figure for her then-10-year-old to see; how as a precocious fourth grader in Fresno, California, she not only played a witch in ‘Hansel and Gretel,’ but also convinced her teacher to resurrect her character and allow her to sing “Maybe This Time”; or how her Juilliard training, while rigid and stifling, ultimately allowed her to develop her famed soprano voice.

It was an enthralling, altogether wonderful evening with a masterful performer, and one can only hope that the rest of Steppenwolf’s LookOut Series is of similar caliber.

Setlist for Audra McDonald at Steppenwolf, 5.22.17

3. Stars and the Moon

4. I Could Have Danced All Night

7. You Don’t Bring Me Flowers (McDonald and Swenson)