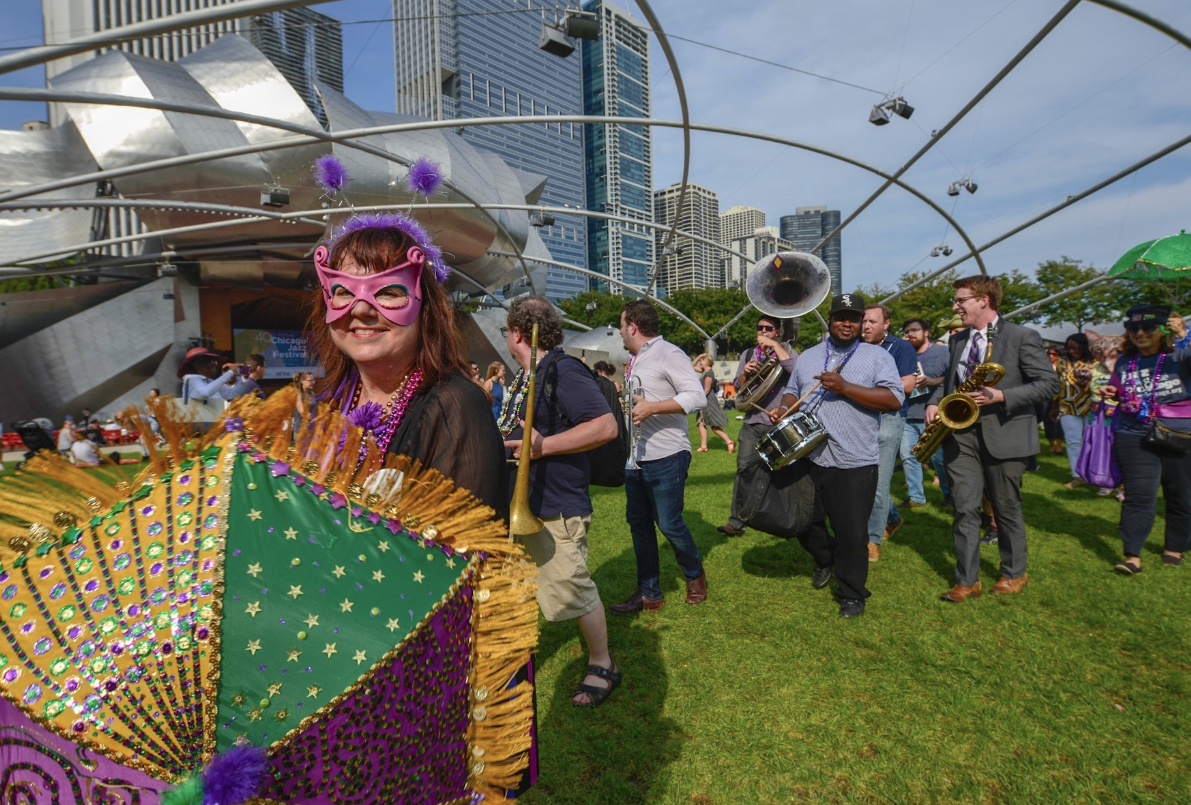 Headliners and Highlights at the Jay Pritzker Pavilion include Cécile McLorin Salvant, a Tribute to Nat King Cole featuring Freddy Cole, a Tribute to the 50th Anniversary of the Jazz Institute of Chicago and Eddie Palmieri

The Chicago Department of Cultural Affairs and Special Events (DCASE) is pleased to announce the headliners and festival dates for the 41st Annual Chicago Jazz Festival, happening August 23 to September 1 at Millennium Park, the Chicago Cultural Center (78 E. Washington St.) and at other venues throughout the city. The free-admission festival will include a special tribute to Nat King Cole by his brother Freddy Cole and a celebration of the 50th Anniversary of the Jazz Institute of Chicago, the festival’s programming partner.

“The Chicago Jazz Festival has become a celebrated staple of our city’s cultural life and a highlight of our summer season,” said Mayor Rahm Emanuel. “This year’s celebration of the Jazz Institute of Chicago, along with a lineup of legendary innovators, homegrown icons and new stars promises to thrill and inspire music lovers from Chicago and around the globe.”

“This is a great line-up of headliners, and our expanded ten-day festival will animate our city and  neighborhoods with numerous free performance and place a spotlight on our great clubs and presenting institutions,” said Mark Kelly, DCASE Commissioner. “Celebrating Chicago’s music legacy, we will honor Nat King Cole, the Jazz Institute of Chicago, The Art Ensemble of Chicago, and many of our great musicians as we welcome artists from across the globe.”

The Chicago Jazz Festival will also include free performances at neighborhood clubs and venues August 23 to 29, leading up to the concerts at the Chicago Cultural Center and in Millennium Park. The additional performances offer festival audiences even more opportunities to experience Chicago’s exceptional jazz sounds at some of the city’s legendary music venues.

The Chicago Jazz Festival showcases free live performances by important Chicago artists alongside some of the greatest names from around the world on multiple stages. The festival is produced by DCASE and programmed by the Jazz Institute of Chicago. The full schedule of performances at Millennium Park, the Chicago Cultural Center and participating music venue locations will be announced at a later date. For more information, visit chicagojazzfestival.us.

Promoting and nurturing Chicago’s worldclass jazz community since 1969, the Jazz Institute of Chicago is celebrating its 50th Anniversary at this year’s Chicago Jazz Festival. The organization has worked tirelessly to provide education, develop and support musicians, build audiences, and foster a thriving jazz scene in Chicago through education and public programs. As the programming partner for the Chicago Jazz Festival, Chicago musicians past and present will take the stage at 6:25 p.m. to celebrate Jazz Institute of Chicago as one of the greatest advocates for jazz and Chicago’s music legacy. The City Was Yellow is presented as a tribute to the Jazz Institute of Chicago’s 50th anniversary with reflections on the new Chicago “real book” anthology compiled by drummer, composer and presenter Mike Reed featuring Rob Mazurek, Nicole Mitchell, Jeff Parker and Mike Reed.

2019 also marks the 100th birthday of the legendary Nat “King” Cole, famed for his soft baritone voice and hit singles like “Mona Lisa,” “LOVE,” “Unforgettable” and “The Christmas Song.” He also made history as the first African-American performer to host a variety TV series in 1956. Jazz pianist and vocalist Freddy Colewill pay tribute to his older brother’s legacy at 7:45 p.m. An incredible entertainer himself, Freddy Cole’s career has spanned over six decades, dozens of albums, and countless stages across the globe.

Friday, August 30
The evening’s performances will begin at 4:15 p.m. with two legendary Chicago musicians, the world-renowned guitarist George Freeman and blues harpist Billy Branch. George Freeman is celebrating his 92ndbirthday with Chicago label Southport Records’ recent release of George The Bomb!, a blend of jazz, blues and other genres that highlights his one-of-a kind style. He’ll be joined by blues harpist Billy Branch who contributed to the album along with other greats.

Joel Ross and his Good Vibes ensemble perform at 5:25 p.m. An alumnus of the Jazz Institute of Chicago’s Jazz Links student programs, Joel Ross is a multi-talented young artist, who not only plays the zibraphon but was also introduced at an early age to jazz percussion and piano.  In 2018, acclaimed trumpeter Ambrose Akinmusire Quartet released Oragami Harvest, breaking new ground with a combination of genres from contemporary classical to jazz, funk and hip-hip. The quartet will perform at 6:25 p.m.

The final performance of the evening begins at 7:45 p.m. featuring a special 50th Anniversary celebration of Roscoe Mitchell and Art Ensemble of Chicago for their lasting contributions to Chicago jazz. The group evolved from founder Roscoe Mitchell’s musical vision through adventurous collaborations in early and mid-sixties Chicago. In 1969, after traveling to Paris they became known as The Art Ensemble of Chicago, an extension of the original Roscoe Mitchell Art Ensemble. A key figure in avant-garde jazz, Roscoe Mitchell is a composer, instrumentalist, educator and co-founder of the Association for the Advancement of Creative Musicians with its tagline, “Great Black Music–Ancient to the Future.”

Saturday, August 31
Inspired by Tchaikovsky, Ben Wendel Seasons dedicated each track of his 2018 album The Seasons to a specific month and artist who has shaped his creative vision. This performance is begins a wonderful evening of jazz at 4:15 p.m.

Chicago-based pianist and composer Ryan Cohan has produced five critically-acclaimed albums, including The River which was performed in Millennium Park in 2013. Ryan Cohan’s Originations is set to be released in June and will be part of the performance beginning at 5:25 p.m. at the Jay Pritzker Pavilion.

Six-time GRAMMY® Award-winning jazz bassist Christian McBride will perform at 6:25 p.m. Powered by a relentless energy and a boundless love of swing, McBride’s path has described a continuous positive arc since his arrival on the jazz scene.

The Chicago Jazz Festival will welcome back Cécile McLorin Salvant to Millennium Park at 7:45 p.m. The world first learned of her incredible vocal artistry when she won the prestigious 2010 Thelonious Monk International Jazz Competition. In just under the span of a decade she has evolved into a multi-GRAMMY®Award winner, as well as a prophetic and fearless voice in music today. Her 2018 release The Window is an album of duets with the pianist Sullivan Fortner, exploring and extending the tradition of the piano-vocal duo and its expressive possibilities. The album garnered a 2019 GRAMMY® Award.

The Dave Rempis Quartet is a free-improvising whirlwind that draws inspiration from a shared interest in West African and Latin American rhythms, coupled with American funk and jazz. Led by saxophonist Dave Rempis, the band originally formed for a house party in April of 2004, and to this day their performances maintain a raucous energy and relentless grooves. They will open the performances at 4:15 p.m.

Following at 5:25 p.m., vocalist, guitarist and composer Camila Meza will bring her gift for creating musical landscapes with soulfully pure vocals and expertise on guitar. Camila Meza, originally from Santiago, Chile, has garnered attention for her distinctive ability in blending jazz with the sounds of Latin America, Brazil, folk and pop along with the emotional depth of her music. Latino–America Unida featuring Miguel Zenon, Antonio Sanchez, Melissa Aldana and David Virelles follow Camila Meza at 6:25 p.m.

Known as one of the finest pianists of the past sixty years, Eddie Palmieri is a multi-GRAMMY® Award-winning bandleader, arranger and composer of salsa and Latin jazz. The legendary musician will close out the 41st edition of the festival at 7:45 p.m. On the piano, he skillfully fuses the rhythm of his Puerto Rican heritage with American jazz. Recognizing Palmieri as an American icon, the Smithsonian’s National Museum of American History recorded two of Palmieri’s performances for its archives in 1988. In 2013, Eddie Palmieri was awarded the coveted Jazz Master award by the National Endowment of the Arts, the highest honor an American jazz artist can receive.

Admission to the Chicago Jazz Festival is free. Hours for Thursday, August 29, are 12–4:30 p.m. at the Chicago Cultural Center and 6:30–9 p.m. in Millennium Park. On Friday, August 30, through Sunday, September 1, the festival will be in Millennium Park, 11 a.m.–9 p.m. Before the Jay Pritzker Pavilion starts in the evening, performances can be heard throughout the day at the Von Freeman Pavilion on the South Promenade from 11:30 a.m. –4 p.m. and the Jazz and Heritage Pavilion on the North Promenade featuring a wide range of artists from noon–4 p.m. The Roof Top Jazz: Young Jazz Lions and NextGen Jazz stages will feature young, up-and-coming Chicago musicians on Saturday, August 31, and Sunday, September 1. The full lineup will be released in early summer.